Police officers from Kakamega are currently investigating an incident that happened today yesterday in the evening after a group of men allegedly attacked a police Convoy in attempts to free their accomplices who had been arrested for ferrying uncustomised sugar.

According to the reports given by the directorate of criminal investigations, it has been revealed that a number of suspects were allegedly arrested by police officers after they were caught ferrying illegal sugar.

However, while taking the suspects to the police station, a number of suspects allegedly ambushed the officers with over ten vehicles wanting to free the suspects along with the sugar for unknown reasons.

This was followed by a dramatic scene after the officers who were trying to get the suspects to the police station for more investigation and questioning were forced to start firing at the suspects who were armed with crude weapons.

In the process, a deadly fight between police officers and the suspects ensued as the officers maintained their ground in attempts to keep the suspects from taking the illegal sugar along with the already arrested suspects away from them.

In the long run, the directorate of criminal investigations have revealed that they were able to neutralize the incident after they allegedly Gunned down one of the suspects who is reported to have died on the spot. At the same time, they were able to arrest several suspects along with their vehicles in which they were able to find a number of deadly weapons hidden for unknown purposes. 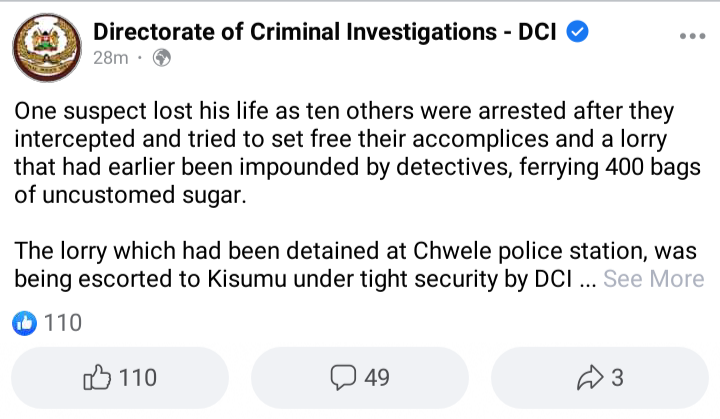