Jimmy Wanjigi, who is a presidential candidate in the upcoming August 2022 polls have been visited by the flying squad days after he hinted that he would fight for democracy in the ODM.

Jimmy Wanjigi, who is seeking to compete with Raila Odinga during the party primary nomination, believes that he has all what it takes to win the nomination.

Wanjigi, in the recent past hinted that he was ready to restore democracy in the ODM party. After he hinted so, flying squad was reported to have raided his offices days later.

According to sources, flying squad visited Kwacha Address the office of Jimmy Wanjigi with an intention that is yet to be released by authenticated sources 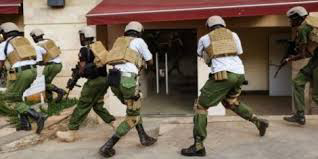 "HNIB Breaking: FLYING SQUAD at Kwacha Address. The office of @JimiWanjigi - just days after he hinted he would fight for DEMOCRACY in ODM. "Na sio ice ya mawe..."

8 Small Shifts That Will Solve 80% Of Your Life's Problems.

Kenyans React To Raila Odinga's Tweet After Posting This Photos.

Stivo Simple Boy Ex girlfriend Reveals Three things that Fans do not know about the artist.