How Car Parts are Stolen at the Port 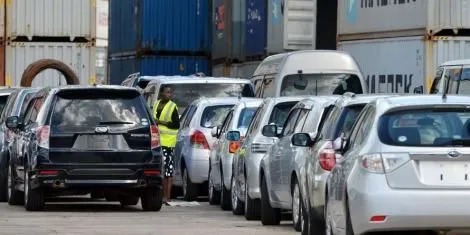 Over the recent past, complaints on motor vehicle parts being stolen from Container Freight Stations (CFS) upon importation have been on the rise.

Individual importers and motor dealers have suffered the brute of unscrupulous who remove parts from the imported vehicles and sell them in the black market.

Mombasa, Kenya's port city, receives in upwards of two to three ships carrying up to 2,000 vehicles imported from different countries, but with the highest number of these imports coming from Japan.

Upon docking at the Kilidini Habour, the vehicle carriers are offloaded by agents charged with the primary responsibility of moving the freshly imported units to various CFSs awaiting clearance from the Kenya Revenue Authority (KRA) and the National Transport and Safety Authority (NTSA).

At the time of importation, the importer of the vehicle nominates a CFS of choice where their unit should be stored awaiting the relevant clearance.

As the units are being moved from the ship's docking station to the CFSs, which are about eight kilometres away, some parts disappear into the thin air.

The road serving the port and the storage yards (CFSs) is characterised by a high number of small-scale motor vehicle spare parts shops, a key contributor to the dismantling of the vehicles to remove some parts.

According to Juma Magoma - a Port Operations Manager based in Mombasa, the imported vehicles, if not monitored, make stop overs at these motor spares outlets where the unscrupulous dealers chunk out some parts for resale in their shops.

"The vehicles on their way from the port make stop overs at these shops where the most valuable and easy to sell parts are stolen before continuing with the journey," he narrated.

Among the commonly sought after parts are the spare tires, rims, radios, side mirrors, car jacks, logos and power window stitches.

Magoma revealed that once the parts have been dismantled, the vehicles are then hurriedly driven to the storage yards when they are booked awaiting clearance.

High end units such as Toyota Prado are prone to theft where parts such as the car computers valued at Ksh70,000 or more are stolen and priced for quick sale.

According to Magoma: "Some of these new cars do not come with spare tires but are fitted with a puncture kit which is now a target of these shady dealers."

He goes on to narrate that once the drivers arrive at the storage yards, they report some parts as missing and book in the vehicles as so, adding that many importers have fallen victims.

"Many car importers have fallen victim to the theft of car parts and have raised complaints. Replacing such parts end up as an expensive affair for them," he added.

Once an importer realises that there is a missing part in their imported unit, they are required to lodge a complaint with the exporter and the shipper so as to identify from the manifest on where the parts got lost.

The complaint takes up to a week before the exporter can respond with a comprehensive manifest.

Magoma says that most importers opt to clear the vehicles before a full response is given owing to the huge storage charges that amount to approximately Ksh4,000 per day.

However, for those who opt to wait and the report from the shipper shows that the parts were recorded as being present by the time of loading and offloading, the cost of replacement is taken care of by the CFS as they are required to compensate the unit's owners.

To curb the menace, insurance companies have now taken active roles of ensuring they assign drivers to transport the vehicles from the port to the storage yards.

To ensure a correct count and record of all motor vehicle parts, three tallies are carried out by the exporter, the shipping line and the insurance company. The CFSs are supposed to countercheck the manifest and sign against in order to verify the correctness of the recorded data.

Car importers are advised to notify their shipper to send the tally from loading port so it can make it easy to confirm what parts are in their units.

Also, the CFSs have resolved to hire escorts to monitor the cars form the port to the storage yards. The CFS are required to compensate for any damages or parts stolen from the vehicles. 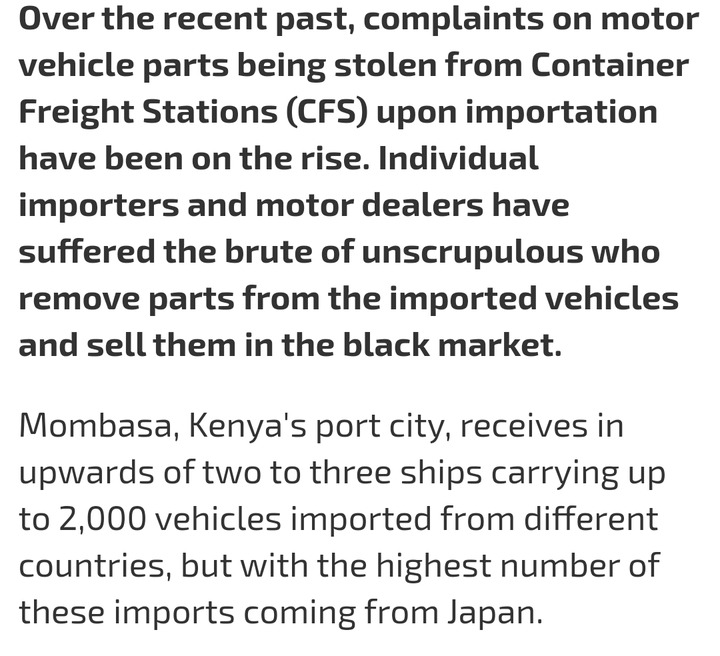