Sakaja: How Ruto Got in Trouble for Supporting Uhuru in 2013 Elections

By Liliynews (self media writer) | 8 days ago 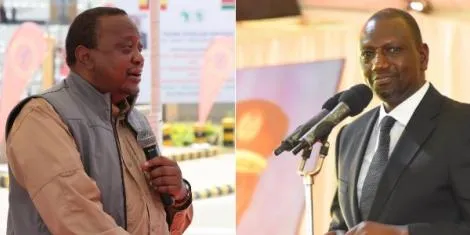 On Wednesday, November 24, during an interview with a local TV station, Sakaja revealed that Ruto faced a difficult time in explaining why he chose to back Uhuru's candidacy while at a meeting in Eldoret.

He claimed that many DP supporters thought Ruto was the greatest candidate for the post at the time and wanted him to run for President for the first time.

Willian Ruto had a difficult time explaining why he had to back Uhuru Kenyatta to his Eldoret Sports Club supporters. It was a difficult decision to make.

"He had to make it," Sakaja said. "There were people who thought he was their expression of political ideals, but he had to go to his people."

The senator, who is also vying for the Nairobi governorship, went on to say that the DP took his political future into account when deciding to back Uhuru.

"He considered the numbers, his political trajectory, and his age before making his decision. "He moved with the people as well," the senator added.

Ruto was also one of the leaders that advocated for the merging of the defunct URP and TNA parties as the country prepared for the 2017 elections, according to the senator.

He explained that Ruto believed the union would strengthen them politically, despite opposition from some members of the party.

"I recall having a conversation with the deputy president at the time, and he told me that even though some of us were resisting, our skills would only come out in a big party," Sakaja revealed.

The gubernatorial candidate, who has just pledged his loyalty to Musalia Mudavadi, the leader of the Amani National Congress (ANC), indicated that any of the OKA leaders would be willing to support the DP in the 2022 elections.

"If the OKA board of directors chooses to support one candidate, that candidate will win." A lot of things are going to happen. There is no such thing as a prophet. There is no such thing as a crystal ball. A lot is going on behind the scenes. Musalia Mudavadi, Ruto's running mate, is a possibility. It is his choice. Anything can happen at any time. Kalonzo has the potential to be Ruto's running buddy.

"The single mistake all these principals will make is to move without their people, because your people will never forgive you, and you will walk alone," he said.