Party Turns Sour As One Man Is Confirmed Dead, 9 In Critical Condition After Consuming Illicit Brew

One person has been confirmed dead this Sunday after reportedly consuming adulterated liquor in Nyahururu town in Laikipia County. County Health chief officer Donald Mugoi said nine people were admitted to Nyahururu County Referral Hospital in a critical state. Nine others who were in critical condition were taken to Nyahururu Referral Hospital and were receiving treatment. It was reported that the 10 men and others took two brands of liquor during a birthday party at a pub on Sunday this morning. Simon Chege who is Nyahururu-based mechanic said that he took a different brand from what his friends had taken, but his friends started complaining of stomach aches while others were found lying by the roads. 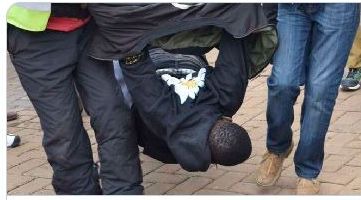 According to the doctors at the facility, the 10 were taken there by police after vomiting and complaining of stomach aches. They were taken to the hospital in a police Land Cruiser after they were spotted lying by roads in various parts of the town. However, it was unfortunate that one of them succumbed on arrival at the hospital. Dr. Felix Masongo, who is the doctor incharge of the emergency unit reported that they had managed to stabilize the rest. The County Health Chief, Mr. Donald Mugoi has reported that the nine people people were admitted to the hospital in a very critical condition. Dr. Masongo stated that they could not immediately confirm the chemical the liquor was laced with or the quantity the patients consumed. 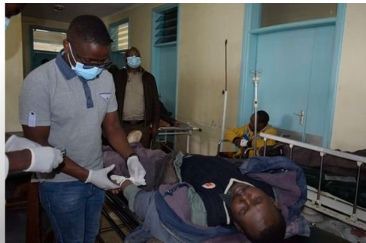 He said that it is blood tests that will ascertain the chemical the alcohol was laced with. He said that they couldn't confirm the quantity taken but some of them seem to have consumed much higher quantities than the rest. He added that it was necessary to keep some of the patients at the hospital for further observations as similar cases in the past have left people with vision problems. Dr. Maaongo said that, they have t several patients with little poisoning and discharged them but they will retain six whom they feel may be prone to optic dysfunction and other complications.

On the other hand, Dr. Mugoi noted that methanol poisoning leads to brain, heart and nervous system depression which ultimately leads to multiple organ failure and then death. He told all those who took the alcohol to go to the hospital immediately for testing and treatment because some symptoms of alcohol poisoning are observed between 24 and 48 hours later. The county government has dispatched public health officers to the outlets to establish the brands of alcohol the patients consumed and the type of chemical they had for further actions. The Nyahururu sub-county police commander, Ms Mary Kiema said an investigation has already been launched. 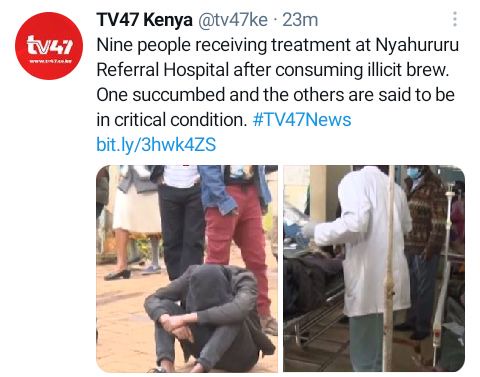 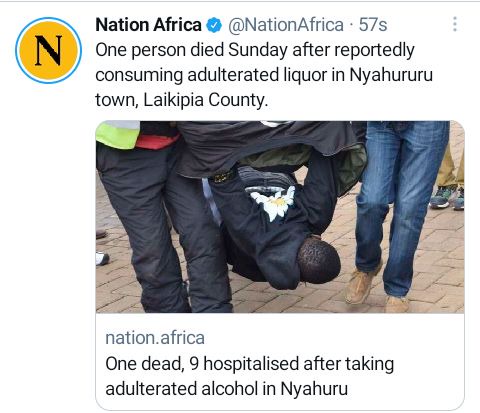 Revealed: This is what you need to do in onion production to produce the desired quality of product.

Healthy Way To Treat Yourself Without Any Guilt.

"My Mom And Bro Bewitched My Dad And Sold His Land, They Hate Me Because Of My Skin Color:Lady Tells