Largest High School In The World since 1993

By Nyariogi (self meida writer) | 21 days 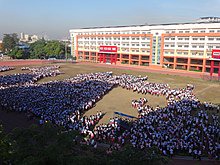 Rizal High School has been listed as the “largest secondary school in the world”since 1993 by the Guinness Book of World Records until 2005 when City Montessori School in Lucknow, India held the title of the world's biggest school, when it had 29,212 pupils, beating Rizal High School in Manila, Philippines, which had 19,738 pupils.

The first secondary school in the province of Rizal known as the Pasig Secondary School was established in 1902 during the incumbency of Governor Ambrosio Flores with an enrollment of 28 pupils. The students came from five neighboring towns including Pasig. The enrollment increased to 45 pupils in November, 65 in December and 88 in January and February in 1903, all intermediate pupils. The pupils were taught in a room of a rented building, 30 meters by 30 meters. The cost of the rent was $15, local currency, the amount paid from the provincial fund.

At the beginning, the Provincial Board was against the establishment of a provincial school in Pasig, which is near Manila. The increase in American financial support by the provincial government was subject to the condition that the pupils from adjoining towns would attend classes in the provincial school rather than seeking enrollment in Manila.

Immediately after the military post occupied by American soldiers was vacated, it was turned over to the provincial government for the use of the Pasig Secondary School in November 1903. The building, although quite spacious, was old and dilapidated with a badly damaged roof. The teachers assigned to this school were all Americans, namely, Messrs. Laughlin, Click and Scruton. The Superintendent of Schools was Charles Rummel.

The military post was vacated when a new building was constructed in 1902 during the administration of Governor Jose Tupas. The basement of the building was used as a woodworking shop. This was the time when a first year class was organized.

In 1913 a site of ten lots, of 63,700 square meters, was acquired through expropriation proceedings from landowners. The estimated value of the site was P38,540. It was surveyed on November 8, 1928 and registered on October 27, 1931 under Certificate of Title No. 4553. Soon, after the acquisition of the site, a modern, reinforced concrete and modified Standard Plan No. 20 school building was constructed. This was in 1914 during the tenure of Governor Mariano Melendres. The building was completed and occupied in 1915.