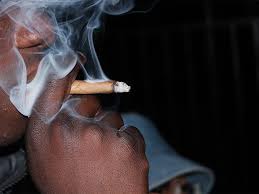 A picture of someone using a drug

Music production industry kind of embrace drug abuse,seem to influence people to do drugs. Some Kenyan musicians especially Gengetone artists do use drugs and they oftenly show themselves smoking or even drinking in their music videos. Some of the lyrics these musicians use in their songs seem to “praise” various types of drug especially bhang. It is hard to find a Gengetone song that does not have a lyric that is not "praising" drugs. Such kind of content in music is harmful especially to youths they may be persuaded by their celebrity musicians to do drugs.

Movies also influence and increase cases of drug abuse in Kenya. In both local and international movies,drug use prevails in a number of movies.Like for instance, in a movie when a movie star is annoyed or is stressed up they do take alcohol as a way of cooling them or making them relax. Some movie stars smoke Bhang especially when they are set to meet a rough situation that do require them to be aggressive and brave.These kinds of potrayals in movies are most likely to influence someone to do drugs which will in turn lead to drug abuse.

Broadcast and print media also influence people to do drugs which eventually leads to drug abuse. Advertising of alcoholic drinks is like promoting alcoholism to me. It is like persuading people to try alcohol.

Content created and supplied by: Abu-Ogoti (via Opera News )