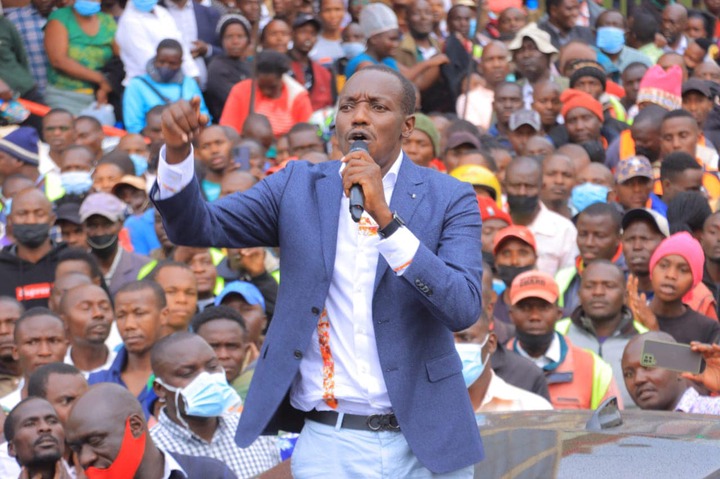 Orange Democratic Movement (ODM) party Kisii Gubernatorial candidate Simba Arati, has promised to take care of his competitors after defeating them in upcoming August 9 general elections. Speaking during Azimio la Umoja Movement-One Kenya Alliance coalition campaigns in Kisii County today which has been attended by Azimio presidential running mate Martha Karua, Arati said that he will employ his competitors in his government after defeating them.

He pledged to employ the Kisii County Senatorial Candidate Omingo Magara of Jubilee if he loses to ODM candidate Richard Onyonka, DAP-K's Gubernatorial candidate Prof Sam Ongeri and Jubilee's Chris Obure saying he will give the two an advisory task. He added that he will buy them cars and give them security to continue advising him as he leads Kisii County.

"I want to tell my competitors hakuna makasiriko, Hon Omingo Magara if I enter in as the second Governor of Kisii I will make sure I give you a seat in my government. Even Mzee Professor Ongeri I will make him the Head of elders who will be providing advises to me. Also the other Mzee Obure I will give them cars and employ security officers for them. Even our Governor here I will make sure he is well taken care of that's how we are supposed to leave as one people." He said.