Is Shirleen Mukami A Con or A Victim of Single Parenting?

By Jackiejeropsing (self media writer) | 14 days ago 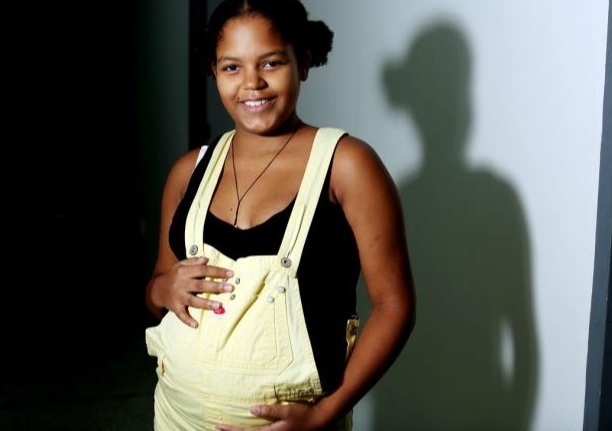 In Kenya, about 11% of teenagers are having s3x before their 15th birthday. The rates in Uganda are about the same – with about 10% of adolescents having had sex.

The number goes up dramatically as young girls get deeper into their teens: in Kenya an estimated 47% of teens are already s3xually active before the age of 18 – the legal age of consent.

S3xual activity has been encouraged by the proliferation of mobile phones, which can encourage youth to be more sxually promiscuous because of “sexting” or access to p0rn.

Another factor is that there isn’t proper sex education. In Kenya, conservative attitudes and traditional values tend to be the norm and adults aren’t open to talking about s3x or the idea of s3x before marriage. This means young people don’t get the education they need to make informed s3xual choices.

They’re also not taught about contraception which makes them less likely to use it. The use of contraceptives can drastically reduce teen pregnancy. But in Kenya, contraceptive use among teens has been consistently low, increasing to just 10% in 2014 from 6% five years earlier.

According to a report by Health Care for Women International, single motherhood is prevalent in urban areas, older age, and people with poor economic status.

On November 10, 2021, a 20-year-old Shirleen Mukami shared her struggles as a single mother after giving birth to her son. 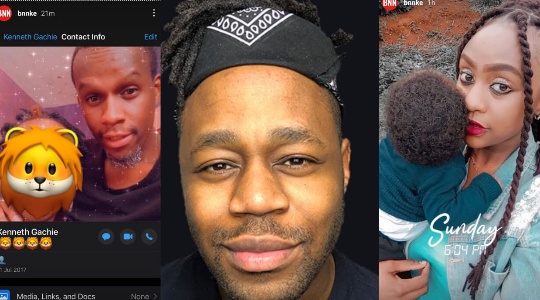 Mukami wrote a lengthy statement on Twitter stating that she welcomed her son on June 15, 2021, but the motherhood journey was filled with a lot of pain and shattered her education dreams.

“Hello, Twitter. I’m Shirleen Mukami, a 20-year old single mother of one boy whom I was blessed with on June 15th 2021. He’ll be turning 5 months in the next few days. But what’s there to celebrate!? It’s been a ride of hell and unbearable heartbreaks and pain,” part of the thread read.

Following her painful experience, she claimed that she gathered a couple of other single and young mothers to help their kind around the country with their group dabbed ‘Baby Shower Sisters’ initiative.

“Kenyans, kindly support our little ‘Baby Shower Sisters’ initiative. We’ve been doing little and can’t mind doing much. Going out more. Meeting more mothers and healing our minds. I don’t even have much myself. But it’s by giving that I have been receiving a diaper or two myself,” she wrote in a tweet. 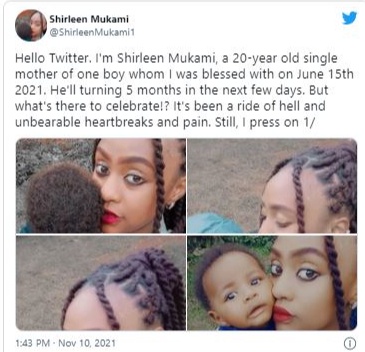 The story quickly went viral and Shirleen took over Twitter trends for a couple of days and even had local media houses cover her touching story.

Shirleen received over Ksh800K as contributions from Kenyans of goodwill to support her initiative which was deemed considerate and kind.

It was not until today that blogger Edgar Obare blasted Shirleen claiming that the whole story was staged by an alleged serial fraudster Kenneth Gachie Kabuga alias Cabu Gah throwing the whole Twitter in shambles.

In a seven-page slideshow, Obare uploaded screenshots from Cabu Gah’s conversation with his friend.

The friend argues that apparently, Cabu Gah who is believed to be Shirleen’s baby daddy was the mastermind behind the whole story with the motive of buying a new whip after his car was written off following an accident. 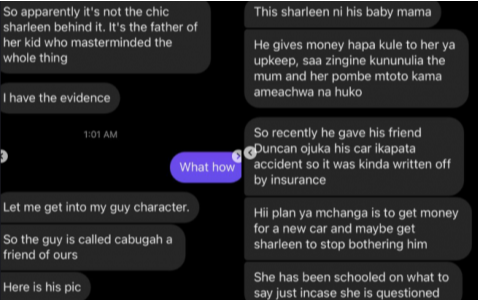 In a video on her Twitter page which has since been deleted, the mother of one however maintains that her story is true and she has no clue about the screenshots shared.

“Deeply saddened, shocked and disappointed in the way my friend Kenneth Kabuga was chatting with his boys. He’s told me it was random idle talk they all do in the group. I’m running this campaign myself, it’s real, I’ve visited homes, my experience is real and I have enough evidence,” she wrote.