Ruto Missing In Action as Uhuru, Raila Meet After Weeks Of Tension

By LarryKatana (self meida writer) | 19 days 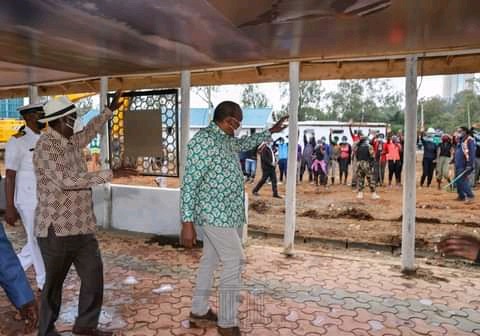 After weeks of tensions on the future of the handshake deal between President Uhuru Kenyatta and ODM leader Raila Odinga, the two "brothers" met on Thursday when they inspected a development project in Nairobi Central Business District.

Raila joined President Kenyatta and other senior Government officials when they made a tour of the Green Park Bus Terminus along Haille Selassie Avenue in CBD.

The meeting between the two handshake partners comes at a time tension has been building up, throwing the future of the Building Bridges Initiative into doubts amid claims that the President is keen to shortchange the former Prime Minister in the 2022 succession politics.

Already, One Kenya Alliance has been formed amid claims that the coalition has the blessings of the President, who is reportedly keen to vanquish the ODM leader.

After the Thursday meeting between Uhuru and Raila, perhaps the claims on the 2022 succession plans will die natural death.