Kenyan YouTuber and Instagram model Robert Ndegwa alias Thee Pluto has today made it clear that he is not yet available for the dating world. This was after he recently interacted with his followers via a Q&A session and one of the followers, presumably a lady, took the opportunity to hit on him.

Using sweet words she promised that she wouldn't leave the hunk if he accepted to be hers.

However in his response Thee Pluto wasn't interested and sarcastically said that he is choosing himself, because he believes that he wouldn't dump himself as shown below. This conspicously comes just a month after the hunk unfortunately broke up with his lover Felicity Shiru.

The duo used to be among the famous young couples in the country, and endlessly served their followers some enviable couple goals. However they called off things in September after dating for less than a year.

It was infact Thee Pluto who first claimed the cause of their break-up to be because their affair used to be one-sided.

For example he claimed that Felicity Shiru never loved him like he loved her, and also alleged that she never Introduced him to her family like he had already done.

The hunk also claimed that she was just using him to chase clout because of how he was already famous. However these allegations were later refuted by the sassy content creator.

She claimed that she infact did love Thee Pluto, only that her love took a longer time to develop unlike his.

Felicity Shiru also made it clear that she wasn't using their relationship for clout-chasing because her life has always been a private one. 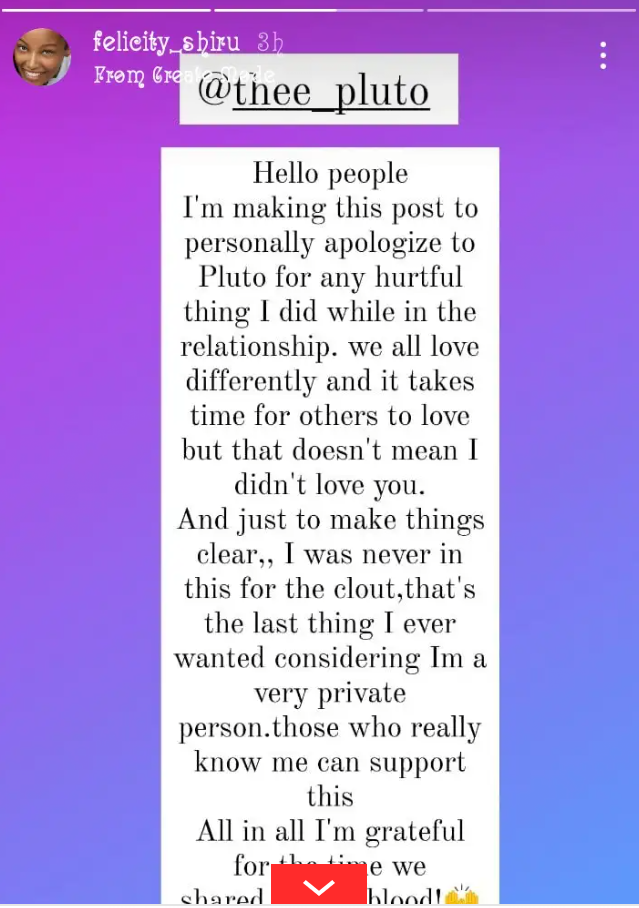