Boniface Mwangi was not assaulted, He obscured officers in line of duty

By Joeblessing (self media writer) | 8 days ago 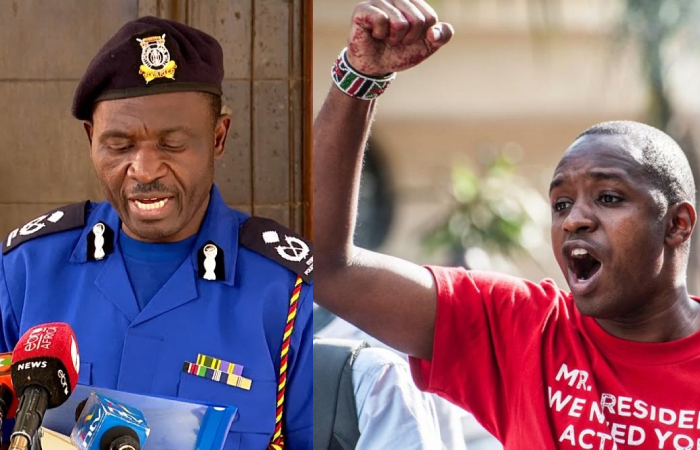 The police spokesman Bruno Siosho has finally spoken after Boniface Mwangi was allegedly assaulted by police officers. He has claimed that the said activist obscured the officers in their line of duty.

The incidence took place when Boniface recorded people claiming to be Kenya Revenue Authority officers wanted to arrest one of them .He enquired of their their job identification cards and they failed to produce them.He hesitated to allow the lady from being arrested until one of them proved they were officers.

The officers in question called for back up where they roughly beat Boniface as the CCTV footage in the building recorded everything .He was manhandled by three officers armed with guns and Rungu yet he was unarmed.

His motive was right since there has been cases of people disguising themselves as police officer to con Kenyans.His good motive was misinterpreted as being biased and he received a beating hopefully he will remember throughout his life.

The incidence comes at a time when police brutality is on the rise where numerous deaths have been reported in the process.Police have been accused of roughly handling Kenyans as they enforce the mask rule and ensuring Kenyans adhere to curfew rules .

The police spokesman has highlighted that the cameras were managed inorder to ensure there is bad blood between the police and the members of the public.He said that the intention of the recording was to help some non compliant citizens escape the arrest by the officers of Nairobi county.

He claimed that after causing the commotion, Benson left the scene but the police managed to arrest the offenders.He has described the act as not patriotic and has condemned it while addressing the Nation television journalist and says that trajectory in such a direction would result to negative consequences.The video went viral among social media users.