By Wabende (self media writer) | 15 days ago 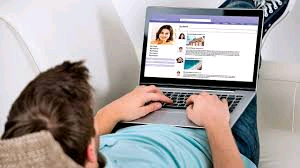 Nowadays getting a companion,wife,husband or girlfriend is just a tap on a smart phone or click of a computer and like long time ago when everything was done the conventional way.

Dating at this age of advancement in technologies come with its lurking dangers.Some people have been swindled of their hard earned money or meeting a person who is not the one displayed in the profile photos.

Take the case of *Mr Nicko Kirior* not his real name.There is this lady he has been chatting with him in badoo.One day she was invited by him to visit his place of residence. She claimed to reside in in Mombasa where else Mr Kirior stays in Busia.

She convinced home to send bus fare to her if he really wanted him at his place of abode.He deposited Kshs.6,000 to his Mpesa account at a local agent and send her.

The money was meant to gather for transport,lunch and for children at her home.She had told him during introduction that she has two kids.

No sooner had she received,she acknowledged receipt of it and told him to expect her at any time during the course of the day.

At mid day Kirior called to confirm where she had reached but all in vain because calla were not being picked.She finally black listed Kirior and put off her phone and that is the time that Kirior realized that he has been swindled of his money.

Another scenario is of *Mr Colin Juma* not his real name.There is this lady he connected through face book.He went through he profile and found to be a cute lady in her mid twenty.

One day on a sunny Sunday afternoon,she called him and informed that she is free and the best place to.meet is Uhuru park.Juma accepted and he hit the road to Uhuru park.At a distance and not in view,he took out his phone and called.

He almost fainted as the lady who picked his called was the age of his mother.He withdrew tactically and switched off the phone.In online dating,some people hide their real ages.

As if that is not enough,some people have been lured and fall traps in these online dating sites.Some have been killed,maimed,raped and their valuable properties taken away by those who purport to be genuine.

In spite of all these,not all who use online are bad elements who characters are questionable but in mostly disadvantages out live advantages in online dating sides.