President Kenyatta's allies from the Mt Kenya region have now realized that even their political careers are not safe ,due to the ongoing takeover of the area by Deputy William Ruto.

This emerges at a time when bigwigs from the central region seem to be unceasingly preferring William over the son of Jomo, which has now made a precise confirmation to the Uhuru family that Ruto is exceedingly taking control. 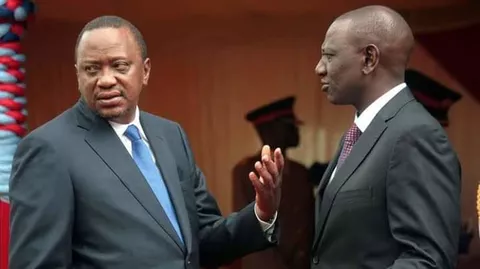 This is the issue that was brought on table when some of the Uhuru-loyal MPs met in Nairobi on Thursday, where it was decided that it is imperative to counter the DP’s elevating influence before the 2022 General Elections.

Reports reveal that the current MPs realized that Ruto's popularity could also see their own positions taken by UDA candidates in upcoming polls.It was decided that the appropriate remediation to this up surging takeover is to act with speed in order to cut down on Ruto's dominance.

Consequently, they resolved to popularize projects that have been initiated by the head of state and his Jubilee government, with a good number of the lawmakers admitting that things are certainly not in order at the ground levels.

“Everywhere we go, our voters are telling us they can see projects but the party lacks the voice on ground,” Kipipiri MP and National Assembly Majority Leader Amos Kimunya told the Monday Standard.

Mwea MP Mr. Kabinga Wathayu, who was also at the meeting, said that the situation is partly to blame on technocrats inaugurating development projects without involving them.

Nyeri Town lawmaker Ngunjiri Wambugu hinted that the plan now is to point out what has been achieved by Jubilee."We need a representation in every tour of these projects. We must lay claim to them as the work of the Jubilee Party That is how we will make the party to have an edge over others in the region,” he said.

The deputy president had earlier on said that a major exit from the ruling party to his UDA wave is surging, with his allies claiming that he has taken over the vote hotspot; Central Kenya from his boss.