Daytime Drama As A Supplier Clings To The Principal's Door For Hours Demanding For Payment.

By Thegreatwritter (self meida writer) | 12 days

There was drama in one secondary school in KisiiCounty on Tuesday when a 42 year old man who had been supplying maize for the school from last term came demanding for payment. 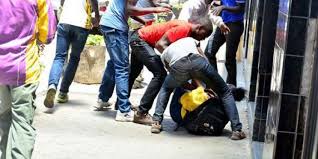 The man identified as Joram is said to have started shading tears when the school head informed him that there was no money to settle the huge debts the school is owing him.

Joram narrated that he had been giving food items to the school without payment for a long time and the school has not been showing any effort to settle his debts.

He vowed not to go home and instead slept at the Principal's door the whole day. "I will not leave this place until you pay me my money" He said while holding the principal's door. The chaos attracted the attention of the other teachers who gathered to witness the drama as Joram was shouting at the top of his voice.

All the attempts by the deputy to persuade him to calm down so that the matter could be solved amicably felt on deaf ears.

The principal is reported to have closed his door and left the scene without talking to any teacher as Mr Joram was left lying at his door up to 4.30pm.

The security officers however forced him out of the school as the students were leaving in the evening. He promised that he won't relent until his money is given to him by the school.