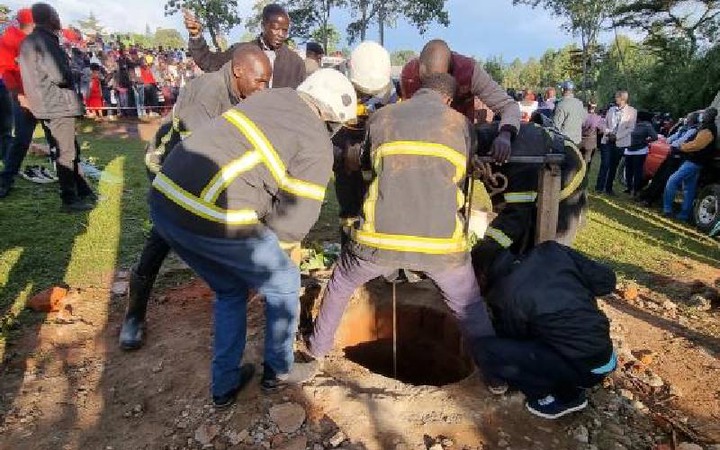 Using his gold mining talent, he has defied the odds to carve a niche for himself in his voluntary rescue missions within and outside West Pokot County.

Leonard Kamosin who helped to retrieve three bodies from a 40 foot deep well at Chewoiyet primary school has been praised for bravery and sacrifice.

Without an oxygen cylinder to assist him in breathing, he intervened by descending into the borehole where two class eight pupils and a mason had died in a tragic incident at the weekend.

His wife Teresa Chebet who was scared that he might die inside, went down on her knees in prayer as he scaled down the borehole.

The thought of raising their young children as a single parent crossed her mind and she closed her eyes in prayer as her heart pounded.

“He had not informed me prior to his decision to rescue. I just saw him take a rope and started fastening it around his waist. In a flash of seconds, he started descending into the borehole. I was shocked and I started shedding tears,” she said.

Yesterday, villagers heaped praise on Kamosin by describing him as a hero who risked his life to fish out the three bodies even after rescue efforts by the police, County, and Kenya Red Cross Society teams failed to yield fruit.

For hours, police officers and other experts had tried to enter into the well to retrieve the bodies but they did not manage.

The borehole tragedy occurred after a container used to draw water fell into the well and one of the pupils decided to enter into the well to retrieve it but took long to resurface.

The second pupil decided to descend and help the colleague but also failed to surface, forcing a mason to try his luck in helping the children come out of the well but the rope he was using broke midway and they all died during the Friday afternoon tragedy.

Rescue teams made frantic efforts to retrieve the three but it was at around 6pm on the fateful day when Kamosin, offered a helping hand and managed to remove the three bodies.

Kamosin told The Standard yesterday that he had to sacrifice his life to get the bodies despite the police, county rescue team and Kenya Redcross society's attempts for close to four hours failed.

Kamosin who claimed to have worked in gold mines said he used his experience of entering into deep pits to retrieve the bodies of the two pupils and the mason.

He said that in his efforts of searching for gold, he would enter into deep manholes of up to 90 foot excavating.

“I had arrived home after herding livestock when I heard the siren of county fire extinguisher vehicle being driven towards Chewoyet primary school. I inquired what was happening and I was informed of the tragedy at the school," he said.

He said he decided to rush and upon arriving, he was shocked by the multitude at the scene.

"I asked the local chief to allow me to enter but she couldn’t believe me. Everyone was worried and told me to keep off, but I assured them I will try. I told them there was a time I entered a 90 feet deep borehole in Trans Nzoia County to retrieve goats that had fallen in," he said.

In the Chewoyet tragedy, Kamosin said, he entered into the well and while inside, he gasped for oxygen but struggled to tie two bodies with a rope. He called out to those outside the well to pull the bodies out.

“A helper who also sinks boreholes helped me to access the third body which was also finally retrieved," said Kamosin.

Kamosin said that he has not received any money for the job he did, adding that his interest is only for wisdom to follow him day and night.

“I sacrificed for the sake of my community members. I have lived with my neighbors peacefully and I don’t expect any reward because I might need help tomorrow or any other day,” he said.

Christopher Mnangat, a neighbour said the man has turned into a hero in the village.

He asked the government to give him a token by educating some of his children and grandchildren.

“The pupils fell in the borehole at around 3 pm on Friday. The Red Cross society and police officers came immediately but they didn’t manage until 6 pm when this man entered into the borehole and retrieved the bodies Had it not for his efforts, the bodies would still be in the borehole,” he said.

He asked the county government to employ him in the disaster management team because he sacrificed a lot.

“I am a parent at Chewoyet Primary School and what he did touches lives. He also has children who are learned but unemployed. Why did the county government officials lie to him that they will reward him but he hasn’t been given anything,” he said.

Content created and supplied by: Paddyboy22 (via Opera News )