By Liliynews (self media writer) | 17 days ago 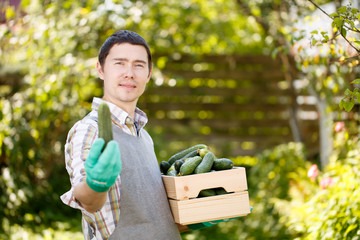 Cucumber is a nutritious fruit. Cucumber has been stated by several medical authorities to offer numerous health benefits. It contains essential minerals, plant components, and antioxidants that may aid in the treatment and prevention of certain diseases. Cucumbers are also low in calories and high in minerals, water, and soluble fiber, making them excellent for encouraging hydration and weight loss. Although cucumbers have health benefits for everyone who consumes them, there are specific cucumber benefits for males. We'll take a look at the health benefits of cucumbers, which are particularly appealing to guys.

Here are a few of the many amazing cucumber health advantages for men:

It keeps you hydrated, for starters.

Cucumbers contain up to 95% water by weight. As a result, it encourages hydration. You must stay hydrated at all times as a male.

Men are prone to stressful exercises and demanding pursuits. This can cause your body to lose fluids. However, you should be aware that your body needs fluid to function properly. As a result, you should include cucumbers in your regular diet.

2. It aids in weight loss

Maintaining a healthy weight is one of the most important health advice for men. Obesity in men has been linked to several ailments, including cancer, diabetes, and heart disease.

3. It has the potential to treat erectile dysfunction.

Cucumber, on the other hand, has been suggested by health professionals as a possible treatment for erectile dysfunction. Citrulline, a chemical found in cucumbers, is abundant.

Citrulline is turned to arginine in the body, which is then transformed into nitric oxide. This nitric oxide aids in the relaxation of blood vessels and the enhancement of blood flow, resulting in better erections. Even a study with 24 guys with erectile dysfunction was undertaken. After a month of using daily Citrulline pills, the condition of 12 of the men improved.

4. It helps to prevent cancer.

Cucumbers contain significant antioxidants and lignans, according to new research, which helps to reduce the risk of numerous malignancies, including prostate cancer.

Cucumbers contain phytochemical elements called cucurbitacins, which have been shown to suppress cancer cell development in the body.

Cucumber extracts were shown to have phytonutrients with free radical scavenging and analgesic properties, allowing the body to be cleansed of several toxins and free radicals that cause cancer.

Cucumbers reduce the body's inflammatory reaction. They include lignans, a type of polyphenol, and fisetin, an anti-inflammatory chemical that may help to lower the risk of cardiovascular disease.

6. It helps to get rid of bad breath.

Cucumbers have a high fiber content as well as a large amount of water. This aids in the removal of bacteria that produce bad breath in the mouth.

7. Cucumbers can help you avoid a hangover.

The most inconvenient aspect of drinking alcohol for some guys is the early morning headache and other side effects commonly referred to as hangovers. If this describes you, there is a way to avoid it and still enjoy your morning after a night of drinking. Cucumbers contain a lot of nutrients, vitamins, water sugar, and electrolytes, which will ensure that you don't have a hangover again. If you eat a cucumber before going to bed, your hangover will be much less severe the next morning.

That concludes the top health advantages of cucumbers for men.