By Kenyanews.com (self media writer) | 9 days ago 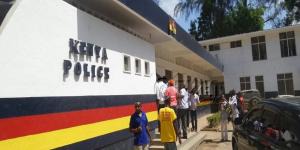 Seven police officers were injured in a melee at Bukiri police patrol base in Samia, Busia County after a mob raided their station on Thursday, October 7.

The commotion started on the said day after a citizen who resides in Bwiri Location filed a complaint at the station, alleging that he was defrauded Ksh50,000 by another resident.

The accused, according to the police officer who recorded the statement in an occurrence book (OB), was reported to have obtained the money by false pretence. He was then summoned to appear at Bukiri police patrol base to record a statement on the allegations on the said day.

"He honoured the call and availed himself at around 10 am on Thursday, October 7. However, a confrontation ensued between him and his accuser. The accussed suddenly ran away from the police station following the scuffle and vanished into a nearby maize plantation," the duty officer recorded.

A manhunt ensued thereafter. Armed police officers and members of the public chased after him into the gardens and tracked him down.

A mob that waylaid him on the further end of the plantation, however, took the law into their own hands and assaulted the accused, alleging that he was a habitual lawbreaker.

They descended on him with blows and kicks as he rolled on the ground and shielded himself with his hands. The officers who were tracking him rushed to his aid and rescued him from the mob that was baying for his blood.

The officers handcuffed him and escorted him back to Bukiri police base. Nonetheless, he collapsed and became unconscious upon arrival.

“He was attended to by a clinical officer from Port Victoria clinic within Bukiri market but passed away. Members of his family raised an alarm which attracted members of the public who rioted and prevented police officers from removing the body from the scene (police base),” an excerpt of the report reads.

A deputy police commander from Busia County, later on, joined the cavalry and addressed the agitated members of the public. His efforts to quell the riot backfired as the mob went on rioting and further assaulted seven police officers.

The seven including two inspectors and five police constables recorded injuries in the legs, pelvic, head, ribs, chest and hands in general.

“The houses of police officers from Bukiri police patrol base had also been looted by the mob prior to the arrival of the reinforcement,” the police report detailed.

Three police officers were forced to shoot in the air to disperse the crowd.

“Eventually the body was removed from the scene and ferried to Busia Referral Hospital mortuary awaiting postmortem. Detectives also launched an investigation into the matter,” the duty officer recorded. 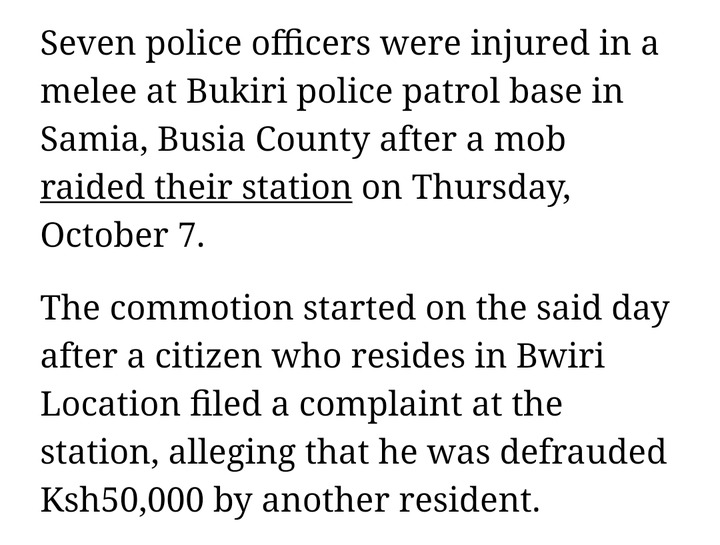