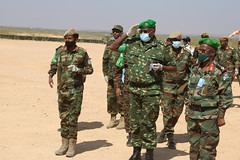 The joint visit forms part of wider efforts to enhance coordination and joint military operations against the militant group, Al-Shabaab.

They inspected guard of honour by AMISOM troops and later held a closed-door security meeting with the sector commander and other military officers.

“Today we welcomed AMISOM Force Commander, Somalia National Army Chief of Defense Forces and the Commander of Somali infantry division who came to boost the upcoming joint operations by AMISOM and SNA aimed at liberating the remaining areas under the control of Al-Shabaab. They had a lengthy discussion and agreed to table the outcome of their meeting in the next meeting between AMISOM and SNA” said Col. Abdirahman Riyale Hared, the Djibouti contingent commander.

Mohamed Tahlil Bihi, the Commander of Somali infantry division who accompanied the delegation from Mogadishu noted that commanders had committed to deepen coordination between the forces and strengthen security in their Area of Responsibility (AoR).

At the end of the conference the commanders signed an agreement establishing a Joint Operations Coordination Cell, which will allow them conduct joint targeted offensives against Al-Shabaab, to liberate territories ahead of the transfer of security responsibilities to Somali security forces, in line with the revised Concept of Operations (CONOPs) 2018-2021 and the Somali Transition Plan (STP).

Why Your Android Phone Hangs And Way To Stop It

How To Find An Online Writing Job And Earn Some Income