By RealWorld (self media writer) | 1 month ago

After President Yoweri Kaguta Tibuhaburwa Museveni announced a few changes in the UPDF, focusing on his only male child Muhoozi Kainerugaba, who was most recently the Commander of Land Forces of the national army, the Uganda People's Defence Forces, this week was crucial for the alleged father-to-son succession plot in Uganda's politics. 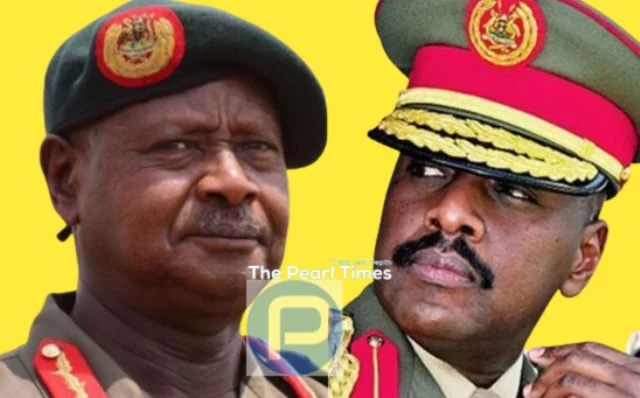 In response to a deluge of divisive tweets, Gen. Museveni took action to control his son—at least in the eyes of the general public. When Muhoozi said his army might conquer Nairobi in two weeks, fears were sparked in Kenya as they were reminded of the expansionist policies of the former dictator of Uganda, Idi Amin Dada.

After his son sent out a few "careless" tweets, Gen. Yoweri Museveni suspended him from his job as Commander of the Land Forces. Muhoozi's replacement is Lt. Gen. Apollo Kayanja Muhanga, who is now in charge of Operation Shujaa.

General Kainerugaba was fired as a result of the first son's meeting with his father the following morning. After a night of irresponsible tweeting that suggested trouble, the meeting was called.

Muhoozi had previously tweeted about subjects that were risky from a diplomatic standpoint. Gen. Museveni had not yet cited his son's partisan political writings or tweets concerning Tigray or Russia as justification for deposing him as CDF.

Rumors that Museveni had 'barred' his son Muhoozi from tweeting about delicate security matters have been circulating for months. Muhoozi even went so far as to temporarily stop using his Twitter account. If you'd like to read the entire story, click here.

Gen. David Sejusa (Tinyefuuza), a former spymaster, initially used the term "Muhoozi Project" in 2013 to refer to rumors of a plot to assassinate political and military figures who resisted Museveni's intention to have his son become president. Both Museveni and Muhoozi have refuted the idea that such a scheme exists.

The fast promotion of Muhoozi to the highest rank in the national army at the age of 48 is one sign that a succession plan with the first son at its core is in place.

According to reports, Muhoozi and Museveni may not have agreed on the succession plan's details, particularly the year when the current generation should hand over power to the next.

People who have been paying close attention to the Muhoozi tale may recall that he first declared on Twitter that he would be retiring from the army in the upcoming months, but later changed that date to 2030, a full year before the 2031 presidential election.

However, Muhoozi only recently revealed alarming information about succeeding his father Gen Museveni in 2026. (Read the Story Here.)

Nevertheless, several prominent government figures, such Justice and Constitutional Affairs Minister Norbert Mao, have stated that Museveni will run for president in 2026 and may peacefully transfer office in 2031. (Read the Story Here.)

The first son may have grown impatient and unwilling to wait until 2030, as seen by his behavior on social media, according to those who assert that Muhoozi and Museveni disagree about the year of succession. However, the Ugandan democracy continues to be plagued by issues around succession. It's obvious that Muhoozi had made references to his desire to run for president, particularly as he approached his 48th birthday.

If Ugandans don't "stop this craziness," Muhoozi will become president, according to opposition leader Bobi Wine. (Read the Story Here.)