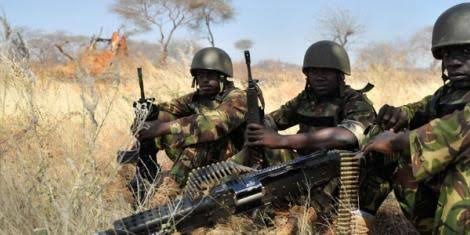 There have been many incidents where KDF soilders have been accused of grabbing land from innocent Kenyans.

Residents of Burat are up in arms over beaconing of a disputed plot claimed by the Kenya Defence Forces (KDF) School of Infantry despite a pending matter in court.

Following an eviction letter in August 2019, more than 20,000 affected residents moved to a Meru court and got orders barring the government from evicting them from the disputed land until the application made by six residents on their behalf was heard and determined.

The Environment and Labour Relations Court also barred the government from carrying out any survey or adjudication of the land in Isiolo North until the matter is determined.

Speaking during a community meeting at Kakili, the irate residents claimed the soldiers were erecting beacons at night, expressing fears that their land could be grabbed under the county government's watch and regardless of an active matter in court.

Led by Kuresha Bille, the residents from Kilimani, Elsa, Ngusoro, Bulesdima, Kabarnet, Akadeli, Kakili and Kambi Turkana areas said they will not allow the beaconing to continue as no one is above the law.

"We will stand firm and defend our land. We will not be cowed by intimidation and threats from the military because we know our rights,"Ms Bille said.

They also claimed that the soldiers had enclosed KK commu nity boreholes used by livestock.

Theft Of Drugs Increases As Shs.1 Billion Government Drugs Are Recovered Hidden At A Private Clinic

"They Are So Daring," CCTV Captures Thugs In Eastleigh Robbing Citizens In Broad Daylight