"Not Again" Kenyans cry After Another Attack On Kenyan Forces in Somalia.

By VictorUoN (self meida writer) | 22 days

Barely a week after an attack on Kenyan Forces was reported in Lamu in which several KDF soldiers were feared dead after their patrol car hitted IED planted by suspected Al-Shabaab insurgents in Baure, another attack has been reported in Mandera. Citizen TV Kenya has reported that three police officers have been killed and several others injured after their land cruiser went over a planted IED on the Banisa Tabaka Highway in Mandera County.

According to a police report, the officers were on morning border patrol when they were ambushed by Al-Shabaab militants, resulting in many police officers being seriously injured. Mandera Police commander reported that the police were on a routine patrol at 6:00am when before one of their vehicles went over the planted device. 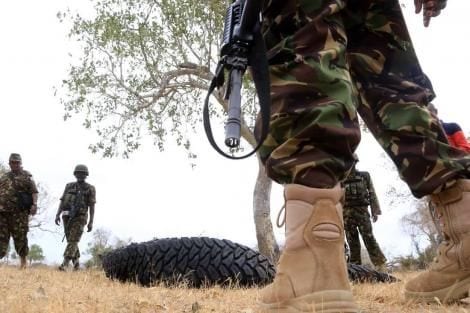 Even as officials promise to stage a manhunt for the perpetrators, Kenyans have been left wondering when these millitans will be contained. Many are citing lose of trained workforce and destitution in the berieved families. The Kenyan government has been asked to increase personal at the Kenya Somalia border so as to tighten security in the area.