By ABELSHARMA (self meida writer) | 28 days

Fear has seized Dar es Salaam City shortly after an armed man of Somali origin attacked the French Embassy killing two cops. The gunman is believed to be a member of Alshabab, a terrorist group that has been ravaging East African countries since early 2000. 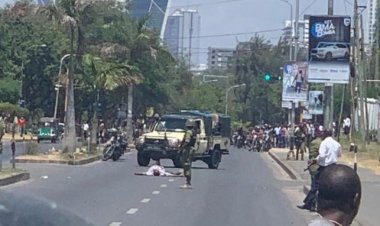 Motorists who were nearby were forced to abandon their vehicles as they run for their lives. The police commander has assured Dar es Salaam residents that security will be the city and the country at large.

The bodies of the two police officers were taken to Dar es Salaam morgue until further instructions are issued.

In the last couple of years, terrorism hasbecomee an issue of concern in East Africa despite all the efforts made by member countries to combat terrorists. May the families of the fallen soldiers remain strong in this hard time.

Content created and supplied by: ABELSHARMA (via Opera News )

Here is The Fearsome South African Made Tank, See Details