By Jackiijerop (self meida writer) | 10 days

Interior CS Dr Fred Matiang'i is now determined to flush out the unrelenting bandits in Laikipia with all means after deploying hundreds of police officers armed to the teeth.

Laikipia witnessed never seen before government war vehicles as a contingent of police officers arrived in an armoured personnel carrier at the Ol Moran Police Station.

The officers were followed behind by two police Land Cruisers, each carrying at least 14 heavily armed officers dressed in camouflage jackets and body armour, including ballistic vests.

At the Ol Moran Police Station, the remaining officers regrouped and were seen being briefed by their commanders as they took refreshments. Soon, another frontline battle vehicle arrived and it was another cycle of takeovers.

The scenes at Laikipia can be mistaken like that of a war zone like somewhere in Afghanistan. But it is in Kenya, deep inside Laikipia County where security officials are battling bandits who have unleashed terror on the residents of the north and the west, killing 10, injuring dozens, and displacing hundreds. 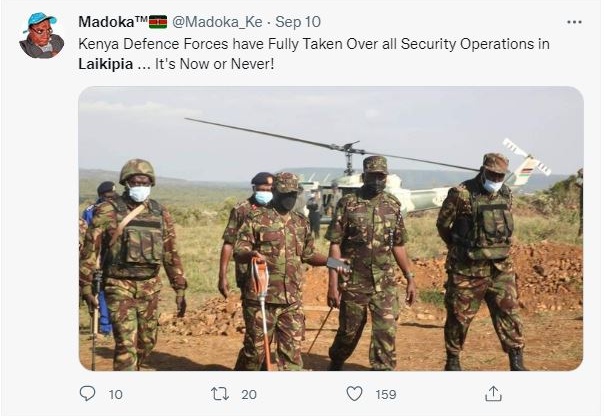 The operation which kicked off last week has escalated as the government unveiled its rarely seen artillery, which is part of the fleet commissioned by President Uhuru Kenyatta at the GSU headquarters three years ago following a series on attacks on police officers in operation areas.

These attacks included the Baragoi Massacre in which 42 police officers were killed by cattle rustlers and now Laikipia is witnessing the armoured vehicles for the first time as Rapid Deployment Unit, the General Service Unit, the Anti-Stock Theft Unit and the general duty officers take charge.

According to reliable reports, at least 400 police officers from different formations are involved in the operation meant to flush out the attackers.

Shioso added that all units in the police service, including the Directorate of Criminal Investigations (DCI), and a number of officers from services such as the Kenya Wildlife Service, the Kenya Forestry Service, among others, are involved.

“The operation is bearing fruit and that is why we are asking parents to allow their children to go back to school and people should start resuming their businesses. It must be noted that the operation is only being conducted in the area that was gazetted as disturbed and not the entire Laikipia County," Shioso said.

“The disturbed area is the Laikipia Nature Conservancy and its environs, and we have enough personnel covering this area. More have been deployed today and the operation is well-coordinated,” he added.

The bandits have left at least 10 people dead among them three police officers with raiders chasing people from their homes and allowing herds of cattle to graze on maize plantations.

And from last Thursday, a National Police Airwing helicopter has been hovering over the disturbed sections of Laikipia, enabling the police service to identify the bandits’ hideouts and coordinate the operation with officers on the ground.

Calm has since been restored with the National Police Service saying it is working towards gradually returning people to their homes.

“The only deficiency we have right now is the assurance to the residents,” Shioso stated. 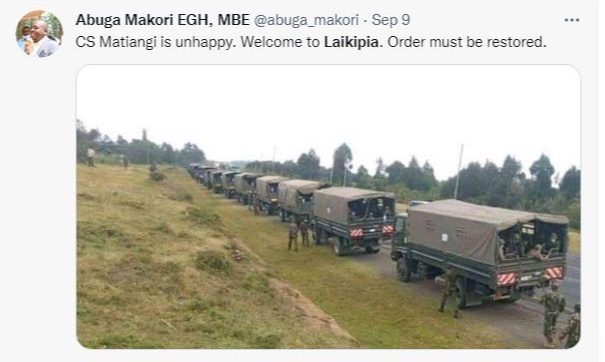 According to reports, Rapid Deployment Unit, the GSU, Special Services and the Anti-Stock Theft Unit are tasked with active combat with the bandits.

The security forces are armed with AK47, M4A1 and G3 assault rifles and full fighting webbings that consist of extra magazine holders and pistols.

Sources further added that General Duty officers are stationed at the Ol Moran Police Station and are tasked with maintaining order at the station and at other places where displaced families are sheltered.

Further, DCI officers are also stationed at different areas to interrogate those arrested on suspicion of orchestrating the violence.

The National Intelligence Service (NIS) and a section of the National Police Reservists who were recently re-armed have also been working hand in hand in ensuring the operation is moving on swiftly.

Last week, police officers in the operation expressed frustrations over lack of coordination but on Monday, they said things have improved since the Interior Cabinet Secretary visited the area and they now have a central command.

“We have orders coming from a centralised source and this eliminated the confusion that we had. We had been operating without a clear strategy before and we even risked engaging in friendly fire, but now, we are well organised,” an officer in the operation said.

The officer added that the armoured personnel carriers, which access all terrains with a 360-degree rotation shooting design, have really changed the game for the squads and troops.

Kids back to school

Amid this deadly operation, pupils and students streamed back to their schools to continue with learning.

According to the police, no incident was reported overnight and that more patrolling officers have been deployed to address any fears. 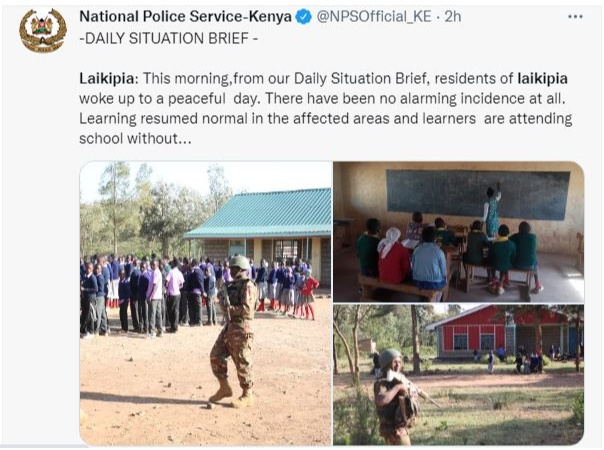 Security chiefs on Monday met President Uhuru Kenyatta for a briefing on the progress of the security in the area and informed him the area was now calm and safe for locals.

The Head of State was briefed that most of the armed herders had been driven from the ranches and that those whose houses had been torched had had them reconstructed or would be reconstructed.

The meeting came after the National Security Council (NSC) met last week ordering a raft of measures to be taken to ensure the safety of locals and especially ranch owners. 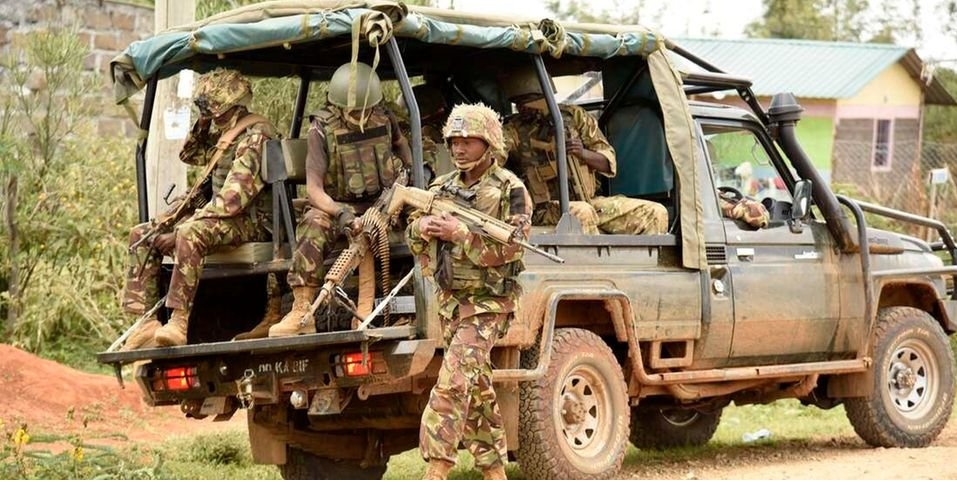 Matiang'i has already announced that the gazettement of the creation of a new administrative sub-county in the Ol Moran area and named it Kirima to tackle insecurity in the area.

This development is expected to bring government and security agencies closer to the backwaters of Sipili and Ng'arua.

Moreover, the Interior CS said a training base for elite police units will be established in the area to enhance police presence and serve as a buffer zone between Laikipia residents and intruders from neighbouring counties. 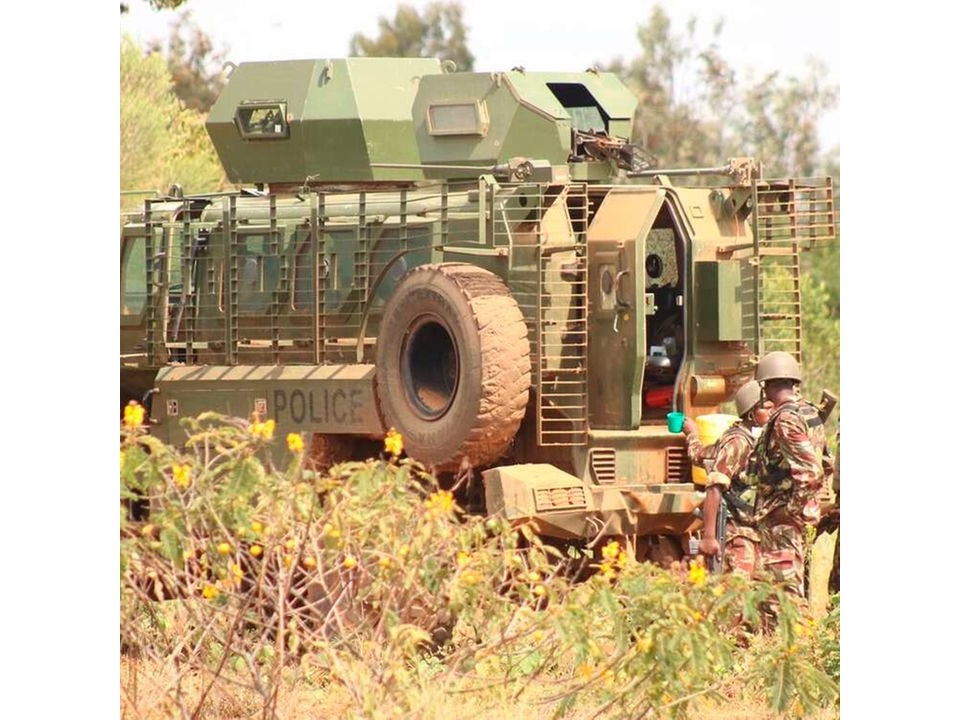 Matiang'i added that there will be a deployment of surveyors to Laikipia to expedite the titling process and review/recommend action on lapsed leases or those about to lapse.

“We will engage relevant ministries and agencies on the ideal management of the Laikipia Conservancy to mitigate its attraction as a conflict hotspot,” he noted.

Normalcy is now slowly returning in the disturbed area but residents are still not convinced to go back to their homes.

The Cause Of Death Of 89 Kenyans In Saudi Arabia.