By Kenyanewszjunky (self meida writer) | 26 days 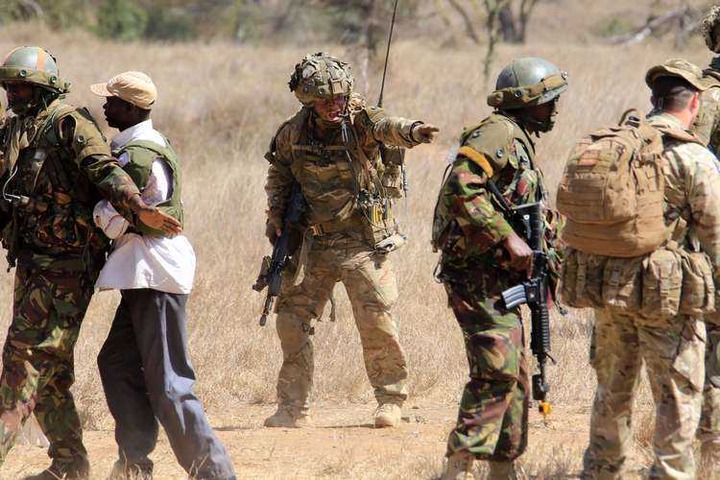 The Kenyan School of Infantry is about a six-hour drive northwest of Nairobi, in the heart of Kenya.

A steady stream of British troops visit Kenya for three weeks at a time to teach the Kenya Defence Force a variety of skills, including urban and rural patrolling, ground sign awareness, and live-firing.

“The important thing to remember is that we’re not here to teach them tactics,” said Warrant Officer 2 Adam Addison, range management and live-firing training officer.

“What we’re here to do is make it safer for them to train.”

It’s inevitable that people will die in battle from time to time, but losing a life in training is unacceptable in this day and age.”

Acacia thorn bushes with large, rigid spikes form a perimeter fence around the camp that rivals barbed wire in strength.

The camp itself is simple, with portaloos, solar showers, and a trailer that serves as a refrigerator and cooker.

Lions and hyenas have been known to pay a visit.

“Perhaps you’d like to film the camels in the garden,” jokes Warrant Officer Class 2 Paul McCann, gesturing outside the perimeter fence.

The camp has undergone a number of changes over the years, including the renovation of the firing range and the construction of an assault course.

There are also plans to improve the urban village so that it resembles a Somali town, which is the type of environment in which many Kenyan soldiers will be deployed.

“We are very good at providing training.”

“I’d go so far as to say that the Americans… while they may have a lot more money than some of us out here, they like the fact that we can bring British soldiers out here and cascade very good, world-class training, capability, and skills.”

The Scots Guards make up the majority of the British troops stationed at Camp Isiolo.

They’ll soon return to their battalion in the United Kingdom, where they’ll prepare to deploy to Iraq or Estonia.

Huge Chinese Rocket Is Expected To Land On Earth Today

Don't Do These Mistakes With Your Phone While Charging

Forget India’s Covid-19 Variant in Kenya, Here is Another State of Emergency