Before The Kenya Defense Forces was established after independence in 1963, many Africans and more specifically, Kenyans, had to join the Kings Army.

Many had to serve in the Second World War before they had to come back home with new skills that they used to gain the freedom that many Kenyans were yearning for.

One of these was, Bildad Kaggia, who later fell out of favor with President Kenyatta for his fight against corruption in the government that he was later on in his life elected as Member of Parliament for Kandara Constituency.

Bildad Kaggia is described as a man who hated the war that was going on in the world but he was still compelled to join it.

He went all the way to South West Asia for the war after which he was later transferred when the war ended.

When the War Office in London decided to create a unit in Britain to rehabilitate the captured African soldiers, Bildad Kaggia applied and got the post of company quarter-sergeant, the first African-Kenyan to get this job.

He worked diligently in his new post with vehemence and during this period, gained a lot of new information while at it.

He came back to Kenya and won the Kandara Parliamentary seat and was among the first parliament.

President Kenyatta also made him a Minister until they fell out of favor with each other.

President Kenyatta and Tom Mboya even went to Kandara to campaign against him and this worked.

He joined Odinga's KPU, but eventually retired from active politics in 1974, after failing to recapture his seat.

Bildad Kaggia died quietly on the 7th of March of 2005 in his home and will always be fondly remembered for his activism, nationalism and politics. 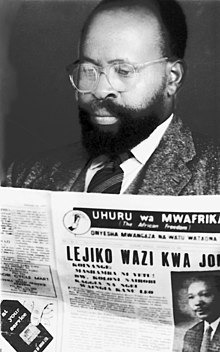