About 8 years ago, Kenya was faced with a problem of terrorist attacks from the notorious Al-Shabaab Militants from Somalia. They caused a problem of insecurity in the country to an extent that visitors feared coming into the country. Law enforcement officers tried all their best to quell the attacks but the terrorists were skilled and informed on their tactics. 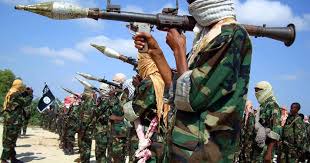 During that time, a number of soldiers found themselves in the hands of the aggressive terrorists and many lost their lives. Those who were lucky to escape or to be saved from the hands of the terrorists will live to remember that day. One of the incidents that will never be forgotten by the KDF soldiers is when the Al-Shabaab ambushed their camp at El Adde and took a number of them hostage.

This was a KDF camp in the North near the border of Kenya and Somalia. The camp had been set up to check the infiltration of the terrorists into the country a thing that had become common. One Friday morning, Al-Shabaab Militants infiltrated two KDF camps and took hostage a number of officers. They went with them to their camp in Mogadishu, Somalia.

The KDF soldiers believed that they had taken them to be used as human shields. This way they were not afraid of being attacked by the angry KDF soldiers who had formed a team to rescue their fellow soldiers.