From Casual Labourer to US Army: Story of Gerald Ngugi

By Elianamillyupdates (self media writer) | 20 days ago 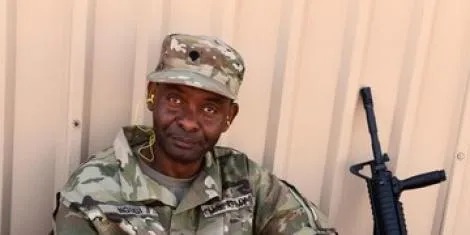 Former South African President and revolutionary leader, Nelson Mandela, once said that a winner is a dreamer who never gives up.

The adage is true in Gerald Ngugi's story, which depicts an undeterred Kenyan who rose from a manual labourer in Kiambu County to a Second Space Battalion in the United States Army.

What's more intriguing is that he enrolled in the army at the age of 40 and battled it out with youth, half his age, to get the honourable slot. How did it all happen for the quadragenarian?

Well, Ngugi's journey began in Kiambu County, where he worked at his grandfather's farm for years- planting and harvesting various crops such as potatoes, collard greens and bananas. He noted that he also worked as a manual labourer, dealing with livestock.

He got the opportunity to move to Boston, US at the age of 38, through the assistance of friends and family, in order to help with funeral arrangements after his brother had passed away.

Ngugi got a job within the state and his opportunity to join the army presented itself.

"I was working at a 7-11 in Boston and all these military guys would come in and talk to me about it, so I decided to join at the age of 40. The cutoff was 42 then," he told the US Army reserve during a previous interview.

He noted that he had to work harder than the younger soldiers in order to meet the standards in all training events, which earned him a chance to join the army as a specialist in the mechanical department (rank E-4). According to militarybenefits.info, specialists within the E-4 rank are paid an average of Ksh233,000 and Ksh282,900.

Since then, Ngugi has served in the army for ten years- an opportunity that, he admitted, has exposed him to a better lifestyle. Further, Ngugi moved to Colorado, where he started a family and has three children.

"The army has given me many opportunities to go to new places, like here in Colorado, where I decided to settle."

"I have been going to school and trying to be physically fit because of the army. The army gives me a higher standard of living. I also feel a sense of pride and honour while serving in the military," he stated.

Ngugi currently aspires to get more educated and enrol in various courses while still serving in the army.

Content created and supplied by: Elianamillyupdates (via Opera News )