The Kenya Defense Forces are the most disciplined armies in Africa, this is on how they are trusted when keep peace. 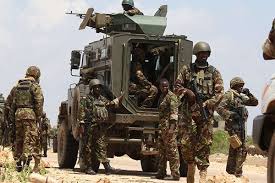 However, from time to time a KDF Officer goes rogue and commits a crime and they have to be arrested and taken to court.

Recently, Kenya Defense Forces has opened up through their social media handles to the rest of the country on what goes on behind their huge barracks gates.

Soldiers have been arraigned in the Martial Courts for breaching some protocols that they are not supposed to as per the low.

However, did you know that soldiers cannot be arrested by the regular Kenya Police? Here's who arrests them.

These are the police wing of the Kenya Defense Forces that is dealing with crimes that involve KDF Officers.

Military Police have a red berret that is different from the other soldiers and this makes them stick out like a sore thumb.

Red Berets or Military Police are tasked with varying military cases, from fraud and forgery, among other sensitive crimes, and they coordinate with officers from the National Police Service, especially the Directorate of Criminal Investigations.

Two cases handled by the military police familiar to the public include:

The arrest of former KDF Major Peter Mugure who was accused of killing his wife, Joyce Syombua and their two children in November 2019.

The apprehension of Sergeant Denis Ochieng who raided his ex-wife’s house and launched a smoke grenade on Saturday, January 16.

These are situations where the Military Police has arrested one of their own in the public glare and taken them to the barracks.