By Timednews.ac.ke (self media writer) | 2 months ago General Muhoozi Kainerugaba had threatened to invade Kenya, articulating that himself and the Ugandan Army would only take a time span of two weeks to capture the Kenyan capital of Nairobi.

Despite being fired from the Ugandan Army, Kenyans born CNN reporter Larry Madowo has finally revealed that their exists a senior Government position he still hold.

Speaking via his own Twitter page account, the CNN reporter articulated that he is still a senior presidential advisor for special operations in the ruling Ugandan Government which is headed by his father His Excellency Yoweri Museveni. 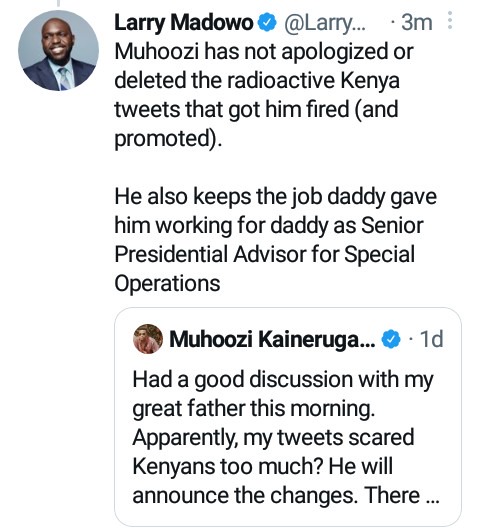 Content created and supplied by: Timednews.ac.ke (via Opera News )

Armed Bandits Attack and Kidnap Worshippers in a Mosque (Photos)

RIP: Emotions High As A 3rd Year Student Who Was Attacked While In Town Dies In Hospital

We Will Protect Your Property And Lives During Raila’s Protests, President Ruto Assured Kenyans

How To Ask For Goodness And Mercy

Check What Happened To The Family And Grave Of Murimi Wa Kahalf.

M23 Rebels Forces Not Ready To Surrender From The War

PHOTOS: Day Two of KCSE Kicks Off as Exam Materials Are Distributed Even in Bandit Prone Areas