By KenyaTrendingNews (self media writer) | 11 months ago 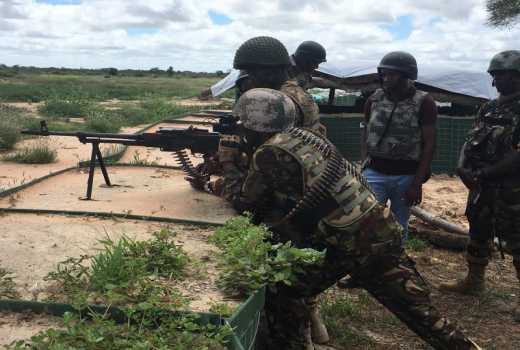 Police in Isiolo County on Sunday night arrested two people after finding them with an AK-47 rifle, two hand grenades and 128 bullets in Merti, Isiolo County.

A multi-agency security team acting on tip from the public stopped the two on Yamicha-Duma road as they travelled in a Toyota Probox car.

Two vehicles, including one occupied by Mr Abdi Fatah Ibrahim and Yusuf Mohamed, sped off when police officers flagged them down, raising suspicion.

A police report seen by the Nation indicates that a hot pursuit ensued and that the two suspects opened fire on the officers, triggering an exchange that lasted for minutes before they were cornered.

Police are also pursuing the vehicle in which other suspects fled the scene.“We are grateful to residents for sharing the information. I appeal to them to continue reporting suspicious persons so that officers respond and prevent crimes,” said Mr Kigen.

He said the suspects will likely be arraigned on Tuesday and charged with being in possession of firearms.This is not the first time a cache of weapons has been found in Merti.

In 2018, police foiled a major terrorist attack after fighting off gunmen, killing one and arresting two. They found a cache of arms including 36 grenades and five automatic rifles.The officers also impounded a car which was rigged up with explosives.

Investigations showed the car was headed to Nairobi where the terrorists planned to use it as a vehicle-borne improvised explosive device (VBIED).

Content created and supplied by: KenyaTrendingNews (via Opera News )

Mt Kenya Business Tycoon Changes Tune On Ruto, Raila as He Sets To Work With Kalonzo for Presidency

Crowd Burst Into Cheers in Kinoo, Kiambu County After Ruto Revealed What Raila Did After Handshake