By TelegraphKenyanews.co.ke (self media writer) | 7 months ago 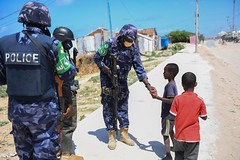 In Mogadishu and in all its areas of responsibility, AMISOM officers work to ensure that the threat posed by Al-Shabaab and other armed opposition groups is reduced, civilians are protected and that the stabilization, reconciliation and peace building of Somalia succeeds.

AMISOM is an active, regional peacekeeping mission operated by the African Union with the approval of the United Nations.

It was created by the African Union’s Peace and Security Council on 19th January 2007, with an initial six month mandate. Since then, AMISOM’s mandate has been extended via various UN Security Council resolutions.

AMISOM is now in the process of gradually handing over security responsibilities to the Somali security forces, as the country makes progress in navigating the difficult terrain from conflict to peace. 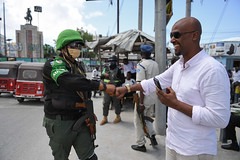 In Mogadishu, on May 29, AMISOM Police Commissioner Assistant Inspector General of Police (AIGP) Augustine Magnus Kailie briefed AMISOM Police personnel before they went out on patrol into Mogadishu City, and urged them to serve the population with humility and dignity and to the standards expected of them.

Celebrated annually on 29 May, Peacekeepers Day is a day when the world pays tribute to the contribution of uniformed and civilian personnel in peace support operations, as well to honour those who have sacrificed their lives in pursuit of peace.

“Today is a very important day for peacekeepers all over the world. As you are going to help provide security together with your Somali counterparts, do it to your best ability.

We know why we left our various countries to come to Somalia. Our essence of being here is to help the Somali people and the peace process,” AIGP Kailie said. 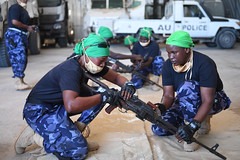 Mike Osilamah Clement, an Assistant Superintendent of Police (ASP) from Nigeria, was among those officers readying for yet another day of service on patrol. This is what he says he signed up to do, and is determined to make a difference in helping advance AMISOM’s mandate.

Clement’s day starts with a prayer, some push up exercises in his room in Jazeera AMISOM base in southern Mogadishu, before quickly cleaning up his gun, receiving his briefing orders, then rolling out to patrol the streets of Mogadishu. This has been, for the most part, his routine since he was deployed to Somalia some two months ago.

The father of four says it is an honour to serve in Somalia for the noble cause of helping bring about peace and security to an African country in need.

“I love my job,” he says, with steely determination. “The benefits are not for myself, not even for my country alone, not for AMISOM alone, but for the entire world. Through our work peace and stability shall prevail.”

AMISOM Police deployed in Somalia in 2009 and has 1040 personnel deployed across the country. Their main mandate is to train, mentor and advise the Somali Police Force (SPF) in order to transform the SPF into a credible and effective force that adheres to international policing standards. So far, AMISOM police has trained over 8,000 Somali police forces.

Since the mission started, female peacekeepers have always had a full role—even on the frontlines—as an integral part of AMISOM.

Before going on patrol, an all-female AMISOM Formed Police Unit from Uganda, also based in the Jazeera camp, showcased their weapons handling techniques as well fitness levels through defensive and offensive maneuvers. 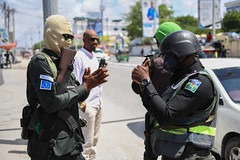 Training Officer, Assistant Inspector of Police (AIP), Immaculate Naggadya, who is from Uganda, said the women peacekeepers are highly motivated, driven and determined to bring success to AMISOM’s mission.

“We do operational duties such as giving support to the Somali police officers. We mentor them. We also protect key facilities and installations like government ministries. Just like our male counterparts, we guard, we protect and we patrol ,” AIP Naggadya said.

AMISOM, in its civilian, police and military ranks, has continuously demonstrated its commitment to promoting the participation of women in its peacekeeping operations. The number of serving female peacekeepers has risen steadily over the years.

ASP Clement is certain that, as Somalia makes steady progress on the path to peace and stability, all of AMISOM’s hard work and the role of its police, military and civilian peacekeepers the years will pay

“We are giving hope to a lot of Somali citizens, we have restored lives to them, we have brought back joy to their faces because seeing us in patrols they are happy,” ASP Mike added.

Reggae Is Back: How State Is Pushing For BBI Revival As Supreme Court Hearing Proceed