By Jackiijerop (self meida writer) | 1 months

The reports of terror suspects nabbed by police in Mombasa made rounds online on Monday, August 23 and on Tuesday, fresh details emerged on how they were nabbed.

According to impeccable sources, two police stations, a busy shopping mall and a popular church were the target of the suspects but unluckily for them, the police pounced on them in a dramatic 10am ambush at the Likoni Channel crossing in Mombasa.

This came after the Anti-Terror Police Unit (ATPU) trailed a number of suspects for at least one month since security signals indicated that deadly weapons and explosives had been dispatched from the Democratic Republic of Congo (DRC) to come and wreak havoc in Kenya’s coastal city.

It is reported that the suspects managed to smuggle in two AK 47 assault rifles and explosives through the Tanzania border at the Lunga Lunga crossing point to execute their murderous mission in Mombasa. 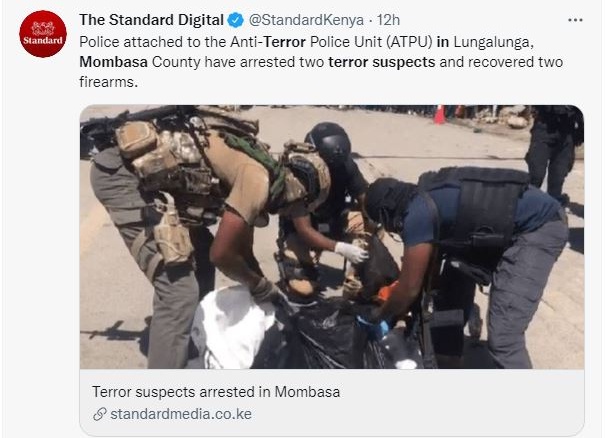 However, unknown to them, the police were on their trail, and Monday morning would mark the sudden end of their deadly mission that could have possibly killed scores of people and maimed others.

The police had to time their attack well so as to evade commotion at the ferry as they sprang on the suspects just before their Toyota Probox, registration KCE 695 U, could board the sea vessel which is used by thousands of pedestrians and motorists every day.

Confirming the incident on Monday, Coast Regional Coordinator, John Elungata, said that one of those arrested yesterday had been living in the DRC while communicating with local operatives to plan the attack.

“Police are now on the lookout for their associates who are believed to be in Mombasa and will in the coming days arrest other suspects of the foiled attack. Investigations are also ongoing to get details of the planned attack,” Elungata said.

According to reliable sources, the suspects and their accomplices had already mapped out the Central and Makupa police stations in Mombasa’s central business district, a popular shopping mall in Nyali area and a church, where they had planned to attack.

A security official in the operation divulged that information on the impending terror attack was gathered from a recently apprehended suspect within Old Town, in Mombasa County.

Insiders further intimated that the ATPU detectives had been tracking the suspects from Lunga Lunga, Kwale County, where it was suspected that they had a safe house from which they kept the weapons that were brought into the country through the Lunga Lunga border with Tanzania.

According to intelligence signals, the two firearms and explosive making devices had been in the house for at least one month and police added that movement of the weapons started from the Democratic Republic of Congo (DRC), with one of the terror suspects.

During the operation on Monday, police shot in the air, handcuffed, and blindfolded the two men before they were bundled into a waiting van. 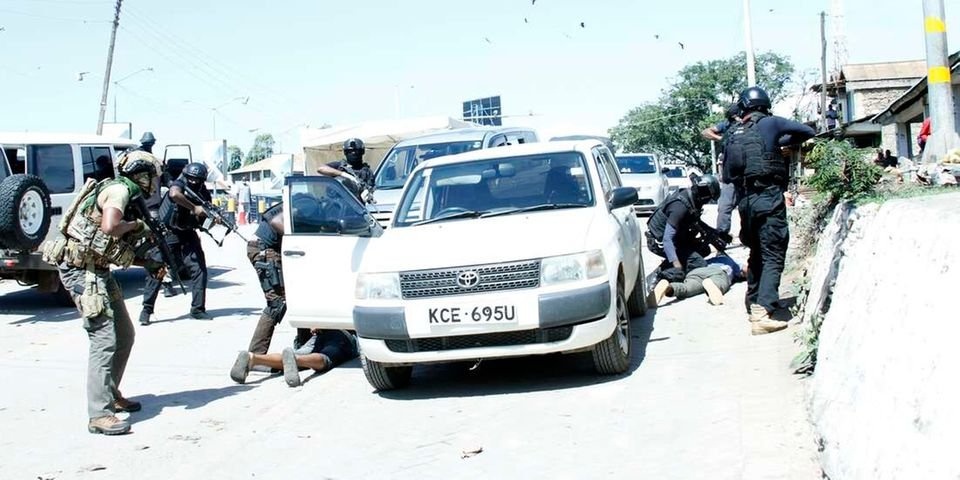 In the Toyota Probox driven by the suspects, police recovered two machetes, two AK47 rifles, 150 rounds of ammunition, and other equipment that were to be used to make explosives.

Suspects had surveyed the area

Also recovered was booklet manuals for assembling explosives alongside sketch maps of Makupa and Central Police stations, showing that the attackers had done prior surveillance of the two posts.

The documents recovered by the police also had written notes naming a popular mall and a Mombasa church that attracts hundreds of faithful. They further contained security analysis of these establishments. 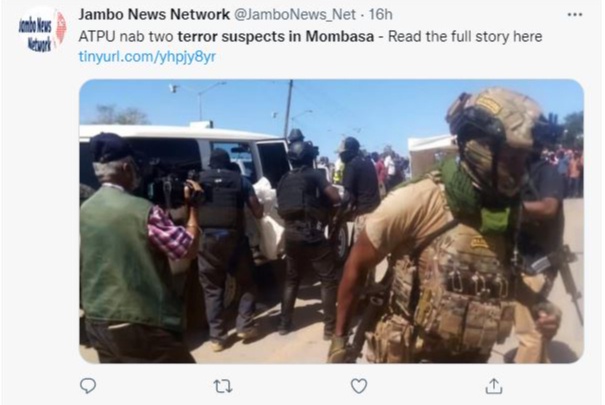 “The attackers were to weigh the two and identify the weakest target to attack after teaming up with local operatives. Their mission for the attack has not been established even as they were coming to Mombasa to link up with the others,” ATPU officers said.

According to the ATPU sleuths, the attack was to involve a local operative, who was working with the two suspects and had been implicated in previous crimes within South Coast.

In one of the past crimes, the suspects shot a police officer on January 2, 2014, after raiding a club called Tandoori where they injured at least 10 people. 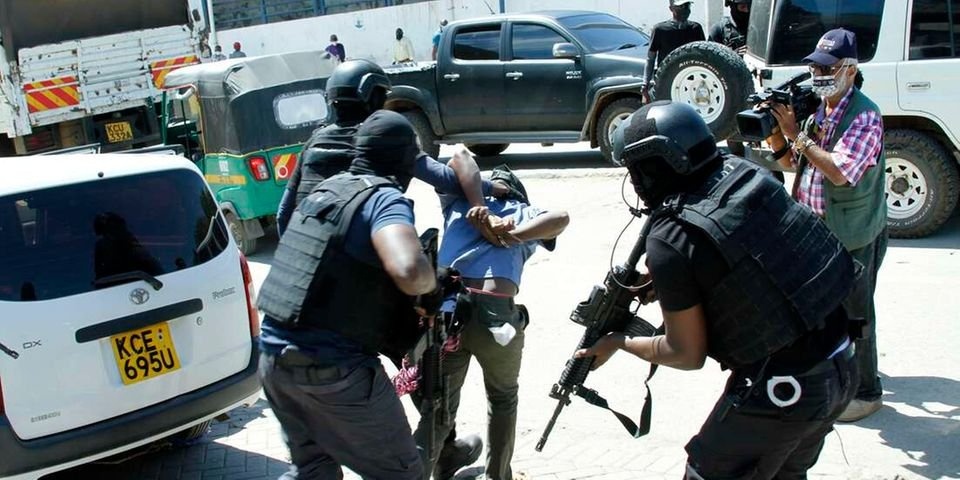 And in yet another incident, the suspects threw a grenade on a police vehicle number plate KBA 231Z and also attacked Kombani police station five years ago.

According to Saggar’s family lawyer, Mbugua Mureithi, he was charged with possessing terror-related materials on his mobile phone in 2018, and was later released.

“He has been cooperating with the officers. Even when he was asked to appear at the ATPU offices in Mombasa he did,” Mureithi said.

But Elungata confirmed that police are holding Mr Saggar for now. “We are still investigating him,” he said. 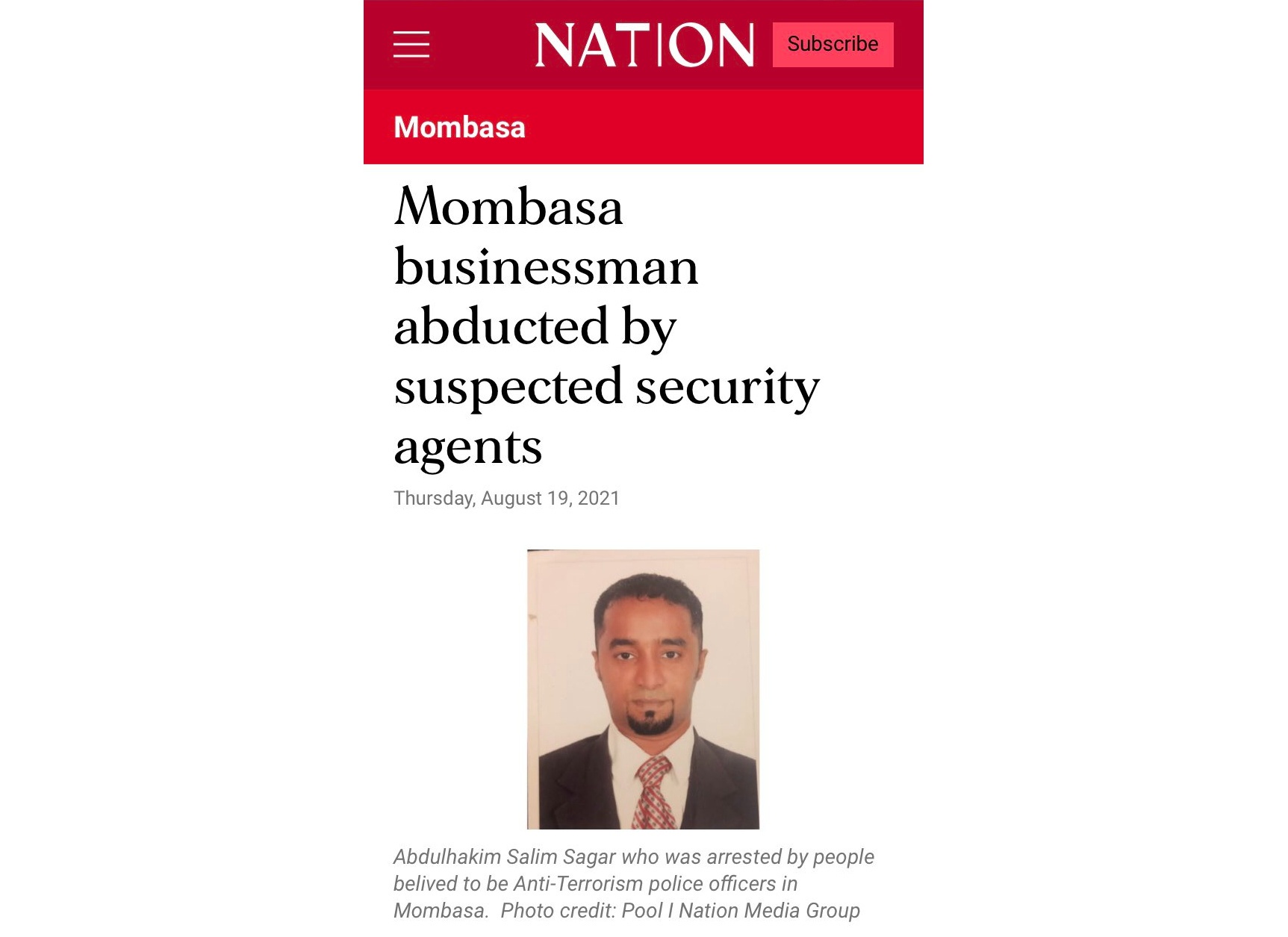 The businessman was first arrested in 2018 following the arrest of his employee but his lawyer noted that Mr Saggar had been reporting to the ATPU offices once every month since 2018.

“In 2018, two men were arrested in the Liboi area, one of whom confirmed to be working for Mr Saggar as a gas supplier. Later, the officers arrested him (Mr Saggar) and we have been following up on the case since then,” Mureithi noted.

Police on Monday were forces to disrupt peaceful demonstrations at the Makadara grounds where activists demanded to know the whereabouts of Mr Saggar.

Led by Mombasa Senator Mohamed Faki, the demonstrators asked the police to follow the rule of the law in seizing criminals, instead of abducting them.

“It is a sad state to note that we are still using such methods to deal with criminality. This matter is not the first, in this county and the coastal region. We are demanding accountability from the Coast Regional Commander,” the senator said.

Mr Saggar is now being held by police alongside the two terror suspects as investigations continue.

8 Powerful Bible Verses Against The Terror Of Fear