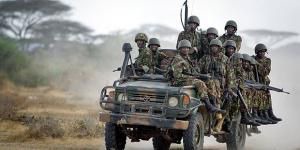 On October 16, 2011, Kenya sent its troops to the neighbouring war-torn Somalia in a bid to help combat the threat of terrorism.

Somalia, a country located in the Horn of Africa and Kenya's immediate neighbour, has not had a functional and well constituted government since January 1991 when then President, Said Barre, fled the country following escalating civil war.

In 1995, the United Nations withdrew from Somalia and the country was effectively declared a failed state. Since then, it suffered prolonged civil uprising with high numbers of its citizens fleeing and settling in refugee camps in Kenya's then Northern Frontier District (NFD).

The civil uprising would become worse over the years following increased cases of terrorism and terror-related attacks that spilt over to Kenya. In 2011, Nairobi made a decision to enter Mogadishu with the sole purpose of helping combat terrorism and restore peace and order.

On October 16, 2011, Kenya sent it troops to Somalia to help the country in its mission to achieve lasting peace and defeat radicalists who held the country hostage for years.

During the invasion of Somalia by the Kenya Defence Forces (KDF), a number of journalists were embedded to the troops in the frontline. The journalists, drawn from different media houses covered the war for months.

As the country marked the Kenya Defence Forces Day on October 14, one journalist - who extensively covered the war in Somalia, could not hold back but share his experience.

Mauritius Oduor, a veteran cameraman working with Citizen TV, narrated his first-hand experience on what KDF officers go through in the battlefield, having spent more than 30 days with them.

Oduor was part of a team of journalist that covered KDF's first entry into Somalia. Despite knowing and understanding that he was going into an enemy territory, nothing prepared him enough for what he was to face.

The cameraman, alongside other journalists, arrived at the Administration Police Camp in the border town of Liboi, Garissa in a motorcade of sixty vehicles, then departed for Somalia.

"They told us that from here, this is the border of Kenya and Somalia, and we are entering the territory of the enemy," he narrated.

As they drove through the thickets, the fear of the unknown overwhelmed them. However, armed to the teeth, the soldiers assured them that they would protect them.

After the 12-hour long journey, they finally arrived at Tabda, Somalia. As the protocol would demand, they were received by the commanding officer and the central sector, Lieutenant Colonel, Jeff Nyagah.

Notably, they also received a 'welcome' from a host they dreaded the most and one they would least want to know about their arrival – the Al Shabab spokesman. The commander called upon Oduor and other journalists to listen to the conversation.

"That guy said that he had seen that the commander had brought the crew (media) to cover propaganda for you. He stated that he would give them the true story," Oduor narrated.

That was when reality kicked in. Unfortunately, the Al Shabaab commandant stood by his word, and at about 11pm, the militants attacked the camp.

"They started firing with RPGs (Rocket Propelled Grenades) from all directions towards the camp," he narrated.

At the time, another camp in Bilis Qooqaani was also being attacked. Hiding inside a bunker, Oduor and his colleagues lived through the night attack while the technical team was hiding in a different bunker.

The KDF out-skilled the militants and subdued them in a well-calculated counter response. When the gunshots seized, the spokesman called again, this time stating that the attack was just a tip of the iceber.

"We were in Somalia for 30 days, and nearly every day we were attacked," Oduor stated.

He added the enemy made five-minute-long attacks during the day using proxies from 2pm to 4pm. Nonetheless, the major attacks happened at night.

Oduor narrated that the second major attack when they were in a convoy on their way to Bilis Qooqaani. After moving for a while, the lead vehicle stopped on the suspicion that they had fallen into the trap of the enemy.

After the head of the lead vehicle gave the green light to go on, Oduor, who was in the fourth vehicle, saw first hand what he had only seen in the movies.

"The vehicle only moved 10 metres before we saw the explosion. It had been hit by an Improvised Explosive Device (IED). The vehicle went up, then it came down," Oduor stated in the interview.

Immediately, they militants began spraying the KDF convoy with bullets on end. Shots were fired from every direction, but the bullets did not penetrate the vehicles.

At the time, the photojournalist picked up his camera and decided to record what was happening. As he recorded, the vehicle he was in was hit by an RPG, causing it to swerve on one side.

Once the KDF troop assessed the position of the assailants, they retaliated, showing no intention to relent. At this time, his colleague broke into sweat, it was a tense moment, they had never been in such a situation.

"There was nothing to speak about. All of us had seen what had happened," he stated.

The KDF, dispatched a helicopter which launched air strikes from above, neutralising the enemy completely. When they got to the camp, they were in a somber mood as they had lost one of their soldiers.

Today, Oduor whole-heartedly appreciates the members of the defence forces.