By Kingnews.com (self media writer) | 23 days ago 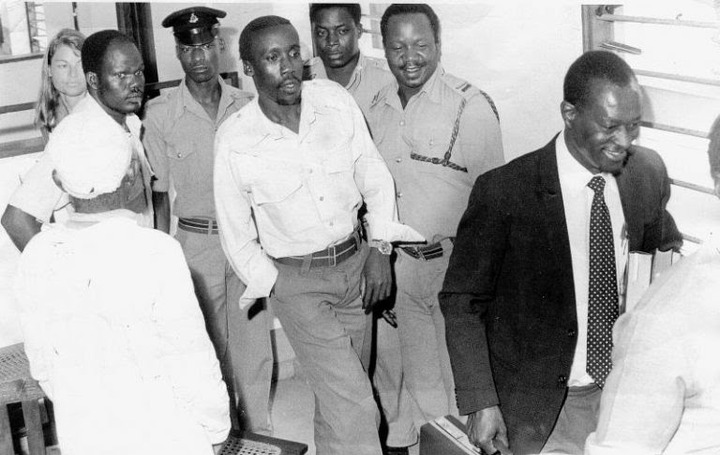 Senior Private Hezekiah Ochuka is said to be the man who was at the centre of the August 1, 1982 attempted coup, which the then president Daniel rap Moi survived in less than a day. Ochuka was born in 1953 in Nyakach.

Ochuka attended Mirogi Secondary School in Nyanza after completing Naki Kabete Primary School there, and he enlisted in the military in 1976.

After completing his basic training at Lanet in Nakuru, he was transferred to Eastleigh Air Base in Nairobi, where he received training in instrumentation and aircraft electricals before continuing his education with the Royal Air Force of the United Kingdom.

The soldier from Nyakach was then assigned to a Senior Private position, which was the second-lowest rank in the Kenyan military during the 1980s.

One thing about Ochuka stood out when local media reported on a confession of the late Sergeant Joseph Ogidi Obuon, who was co-accused alongside Ochuka of orchestrating the coup.

Ochuka bought a radio the day before the coup attempt so that he could coordinate the coup with other conspirators in Nanyuki, Embakasi, and Nairobi.

Anyway, the coup lasted 12 hours in which Ochuka was Kenya’s President for six hours. That was enough time to turn all cops into civilians besides releasing all prisoners-including Diang’a who surprisingly never left Kamiti even after prison wardens fled, leaving gates open.

The coup planners miscalculated, according to the Washington Post: they succeeded in seizing the national broadcaster but failed to take control of other institutions.

It may demonstrate how Ochuka and Company's ideas were never completely watertight.

Ochuka and his comrade Pancras Oteyo fled to Tanzania in search of sanctuary but were later returned to Kenya where they were found guilty of treason and given the death penalty.

According to media reports from 2014, Ochuka's family was pressuring the government to give it a certificate or other official document attesting to his hanging, as well as possibly the clothing he was wearing on the day of his death. Apparently, at least for them to perform ceremonies.

According to additional stories, the family had heard of Ochuka's execution via a Kamiti Prison employee, but they were hesitant to put all their faith in him.

Ochuka was executed in the middle of 1985, according to some reports, while others mention 1987.

Content created and supplied by: Kingnews.com (via Opera News )