By NewsYako (self media writer) | 7 months ago 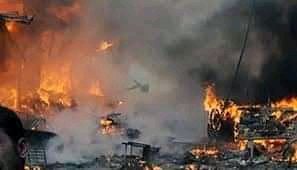 The Suspected terror attack in Kampala, Uganda, has claimed at least two (2) lives after an explosion.

In the incident confirmed by Ugandan police, it is reportedly the explosion exploded at Digida Pork joint in Komamboga, Kyanja.

According to a Twitter user who divulged the incident, he said the explosion occurred past 9pm on Saturday night. 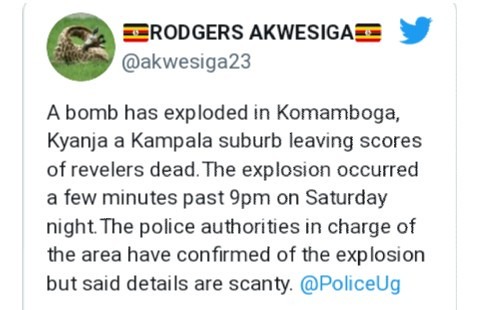 “A bomb has exploded in Komamboga, Kyanja a Kampala suburb leaving scores of revealers dead,” Rodgers Akwesiga posted on his twitter, As confirmed by Blogger Nyakundi

The explosion occurred a few minutes past 9pm on Saturday night. The police authorities in charge of the area have confirmed of the explosion but said details are scanty,” he added

Also, according to Kenyan blogger Cyprian Nyakundi, he has alleged that France and United Kingdom (UK) had previously served Ugandan government and security team an alert over pending attack in the country.

The embassies also, asked their Nationalist to avoid the particular areas had mapped out as potential targeted places.

As this was published, This writer had also learnt Ugandans in the past days decried the influx of Afghans in their country.