AMISOM has confirmed the board has made a decision after it was fully convinced that AMISOM soldiers broke their rules when they turned their anger on innocent civilians.

On 10 August 2021, AMISOM soldiers were on routine patrol in Golweyn town where they encountered an ambush from al-Shabaab, which resulted in a heavy exchange of fire, leading to the killing of one AMISOM soldier, and injuring another one.

The soldiers then opened fire and killed seven civilians who were working on a far near the region where al-Shabaab had attacked them. 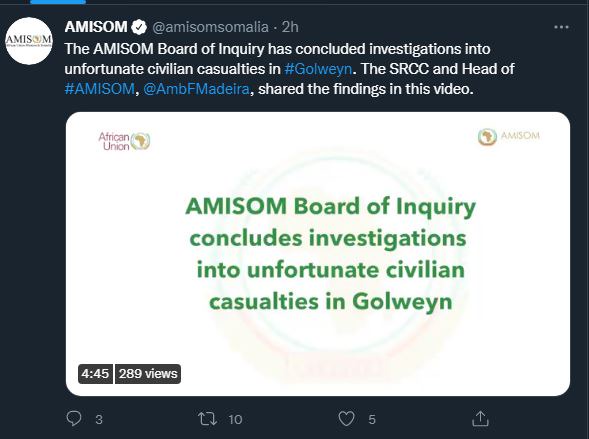 All the AMISOM soldiers were from Uganda.

AMISOM has said, "Accordingly, AMISOM takes full responsibility for the unlawful acts of its personnel."

Today, AMISOM has confirmed a court-martial by Uganda People's Defence Forces (UPDF) will try all the implicated soldiers, and the court proceeding will be carried out in Mogadishu.

Addressing the media, AMIDOM said a team from Uganda has already landed in Mogadishu ahead of charging the soldier.