By PointblankNews (self media writer) | 9 months ago

The war in Ukraine entered its eighth week this week. There's no end in sight. Several peace initiatives have failed. The UN secretary general visit to Ukraine last week didn't change anything. Ukraine, like Syria is now war-torn. Both are facing dire humanitarian crises. Russia objective of Ukraine is 'denazification', removal of the current pro-western government. In Syria, the war started by the rebels intended to overthrow the government of Bashar Al-asad.

According to Al Jazeera, in just 73 days the war in Ukraine has displaced more than 4 million people. This has caused a refugee crisis in Europe. In Syria the conflict which has lasted 11 years had disputed 6.5 million people. Neighbouring countries bear the burden of accommodating large number of refugees. Poland have received the largest number of Ukrainians fleeing from the raging war. Many Syrian refugees fleed to Turkey.

Parties that are not part of the conflict have been involved, both directly and indirectly. Ukraine have been receiving substantial military support from the United States and most western European countries. Last week, al Jazeera reported that the US president signed $150m security assistance to Ukraine. There are several individuals from different countries that have joined the war siding with Ukraine's army. Russia has received support from Chechnya and some foreign fighters, allegedly from middle East. Belarus supports Russia by offering its territory for military use. In Syria, the government efforts to remain power was supported largely by Russia and some assistance from Iran, Egypt and Hizbollah. Syrian rebels was funded by the west, Qatar, Turkey and Saudi Arabia.

These conflicts have witnessed the use of deadly weapons. Such weapons include cluster munitions and thermobaric bombs. Deliberate attacking of civilian targets is a common occurrence. Sides taking part in these conflicts have been accused of human rights abuses, war crimes and destruction of infrastructure. Amnesty International said that there's compelling evidence that Russian troops committed war crimes in their attamts to take over Ukraine's capital Kiev in the early stages of the war. Bodies of civilians allegedly murdered by Russians were found in Bucha town, in the outskirts of Kiev. In Syria, international organizations have accused virtually all sides involved of severe human rights violations and massacres. Syrian government alongside Russia used chemical weapons on civilian targets.

Destruction of major cities is a strategy used in this wars. Mariopol, a port city in eastern Ukraine has suffered the most. The city has been under blockade and bombardment for several weeks. Media reports say that Mariopol is more than 80% destroyed and nearly all its population fled. On the Syrian side, Aleppo was the centre of deadly battle for 4 years and a half. The city witnessed large scale devastation than any other urban centre in Syria.

The consequences of these conflicts are dire. Europe has been largely peaceful for along time but in Ukraine they have found their Syria. 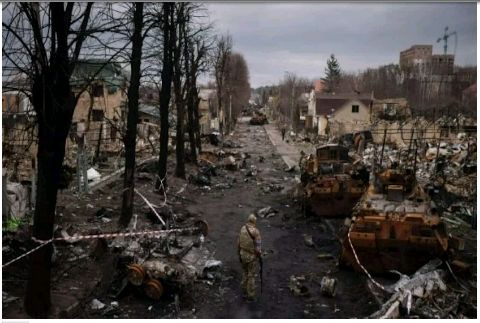 Content created and supplied by: PointblankNews (via Opera News )