By @maeroJack (self media writer) | 3 days ago

The Al shabaab is a militia group founded back in the nineties and is believed to have become a fully fledged militia in December 2006 when the Ethiopian forces invaded Somalia and has then since and his since been terrorising innocent civilians both in Somalia and neighbouring countries.

In Kenya, the militia group has acknowledged carrying out attacks among them, The Garissa University massacre, the Westgate Mall attack and of recently the Dusit Hotel in Nairobi City.

In bid to fight terrorism which is one of the major global issues discussed at the United Nations, the US government declared Al shabaab to be a terrorist organisation in the year 2008. 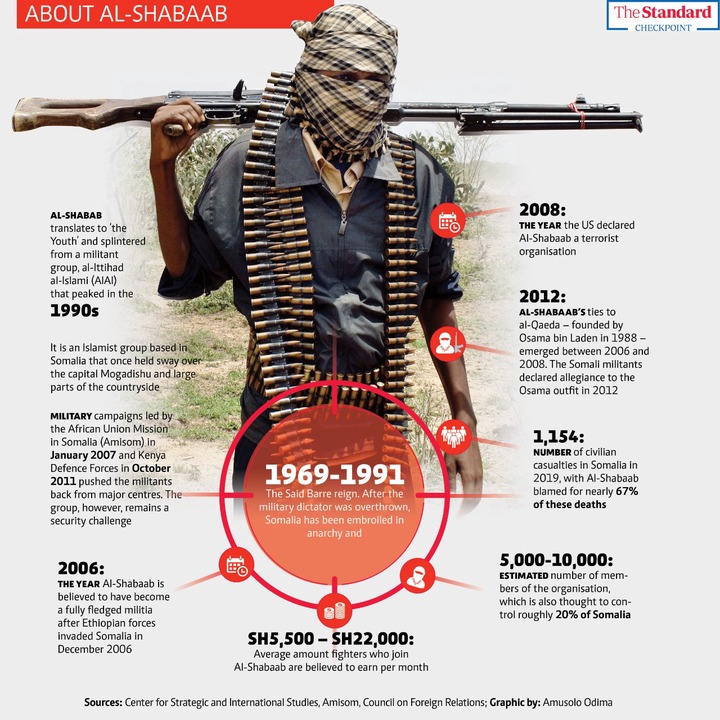 In 2012, The Al shabaab organisation further linked it's operations with the Al Qaeda group founded by the late Osama bin laden in 1988 which had emerged between 2006 and 2008. The Somali militants consequently declared allegiance to the Osama outfit.

In has been revealed that the terror group pays it's fighters an average amount of ksh. 5,500 to 22,200 monthly. However, the source of their funding still remains unknown but it's believed to be high profile political leaders and business tycoons.