By Cheboi_Rewrites☆ (self media writer) | 1 month ago

A mother of 22-year-old Kenya Defence Forces (KDF) Soldier who died in Somalia during an attack has narrated the ordeal about his son leaving Kenyans consoling with her.

According to the tearful mum who delivered her narration on Daily Nation, she has said she doesn't regret her son joining the military. She has noted that the only thing she regrets about her son is the fact he died soon without marrying and leaving her without a grandchild he can remember him with.

"It is unfortunate he died before he coud marry, start a family of his own and make a progress of life the way he had planned. I now don't have a grandchild to remember my son with," the mom said.

She further noted that a day before his demise, they had conversed and he ordered her to supervise a plantation on some land he had bought after graduating for KDF. 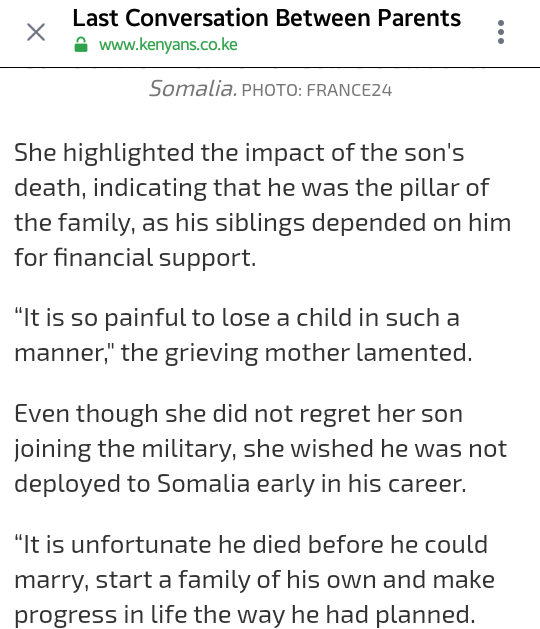 "She  day before he died, he called me and requested I supervise the planting of crops in a farm he bought in the neighbourhood," she said

To make the narration even painful, the heartbroken mother made it known that they had planned to unite as a family next year when he finishes his mission.

As if this wasn't enough, she also made it known that they have no breadwinner in home remaining as her deceased son was the one they all depended on.

The deceased joined the millitary back in 2020 and died in November, 21 2022 after an encounter with a lone gunman who attacked the military base in Juba, Somalia. This was barely a year after his graduation.

His body was flown back home and his burial which took place recently saw his colleagues give him last respects with an honour of 21-gun salute.