By Linty (self media writer) | 4 months ago

This handout picture released by the African Union-United Nations Information Support Team on August 30, 2014 shows Ugandan soldiers, part of the African Union Mission in Somalia, marching through the town of Golweyn in Somalia's Lower Shabelle region on August 30, 2014, after having liberated from Al-Shabaab fighters. Photo credit: Amisom Handout.

The Somali National Army (SNA) Monday announced the killing of a total of 50 al-Shabaab militants in separate operations.

Such operations will be sustained against al-Shabaab terrorists in Lower Juba and other regions, he said.

"SNA and Galmudug State forces killed 35 terrorists and injured others, among them senior officials in Qaycad location near Baadweyn town," Bihi said.

He said that the joint forces liberated several areas in Mudug and Galgudud regions which were under al-Shabaab militants.

Al-Shabaab, an extremist organisation linked to al-Qaeda, has not commented on the latest security operation by government forces, which have intensified actions against al-Shabaab militants in central and southern Somalia. 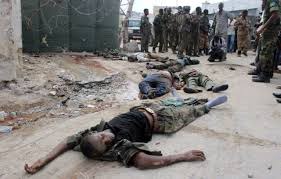