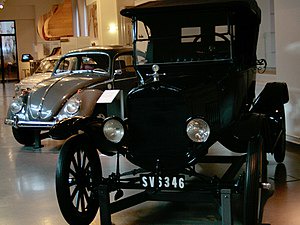 Inventors began to branch out at the start of the 19th century, creating the de Rivas engine, one of the first internal combustion engines,and an early electric motor.

Development was hindered in the mid-19th century by a backlash against large vehicles, yet progress continued on some internal combustion engines.

Production vehicles began appearing in 1887, when Karl Benz developed a petrol or gasoline-powered automobile and made several identical copies.