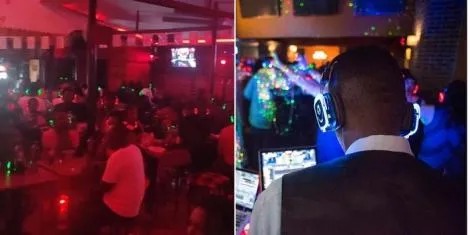 The ongoing crackdown on nightclubs ordered by Nairobi Governor Johnson Sakaja necessitated some restaurants and entertainment joints to devise other means of remaining in business.

To meet the changing market demands and government policies, club owners use unique techniques to keep the revellers entertained.

Silent discos and soundproofing premises are some techniques gaining prominence in the city.

"Using these headphones, we have reduced noise pollution. The only noise you can hear is from revellers, but we have completely cut down the music," Clarret's manager, Odongo stated.

Despite cutting down on loud music, the clubs still manage to give revellers a surreal experience using wireless headphones.

How the Clubs Operate With Wireless Headphones

Unlike other clubs and restaurants where waiters lead revellers to LED-lit rooms, they hand partygoers a pair of wireless headphones under this new system.

They then listen to mixes or live bands, depending on their preferences.

After putting them on, three songs are sent simultaneously to receivers on the headphones. One can listen to one channel or toggle between the three stations. The people control the DJ and not the other way around.

Revellers also control the volume of the music.

Wireless headphones were first introduced in Kenya by Mutuma Mwiraria in 2015 after getting Ksh900,000 in seed funding.

Some have soundproofed their premises to protect the residences from noise pollution.

This technique shields clubs from emitting sound causing noise pollution to residents. It, however, allows revellers to have maximum fun without attracting National Environment Management Authority (NEMA) and government sanctions.

For instance, Citizen TV presenterTrevor Ombija's restaurant, Samaki Samaki, was not shut down after complying with government directives.

"The restaurant has fully complied with all county and national governmental regulations," Ombija asserted.

"We are operational as always," he added.

To comply, some restaurants and clubs stopped late-night meetings in order to avoid clashing with residents and authorities.

Some restaurants have adopted new operation models to survive. Some completely eliminated music from their forms of entertainment. Instead, they unveiled game nights, dancing events and even karaoke to entertain the revellers.