Summary of Six Rulings Issued By ICJ of Kenya-Somali Border

By Summary (self media writer) | 8 days ago

The International Court of Justice (ICJ) on Tuesday, October 12, delivered a judgement on the Kenya-Somali border conflict that troubled the two nations for months.

In its judgement, the ICJ ruled that there is no maritime boundary border agreement that exists between Kenya and Somalia.

The ICJ further recommended a slight adjustment to the current borderline, a ruling that means Kenya has lost at least half of the territory it is claiming belongs to it.

Here are the summary of 6 rulings issued by ICJ:

Finds that there is no agreed maritime boundary between the Federal Republic of Somalia and the Republic of Kenya that follows the parallel of latitude described in paragraph 35 above;

Decides that the starting-point of the single maritime boundary delimiting the respectivem aritime areas between the Federal Republic of Somalia and the Republic of Kenya is the the intersection of the straight line extending from the final permanent boundary beacon (PB 29) at right angles to the general direction of the coast with the low-water line, at the point with co-ordinates

Decides that, from the end of the boundary in the territorial sea (Point A), the single maritimeoundary delimiting the exclusive economic zone and the continental shelf up to 200 nautical miles between the Federal Republic of Somalia and the Republic of Kenya follows the geodetic line starting. 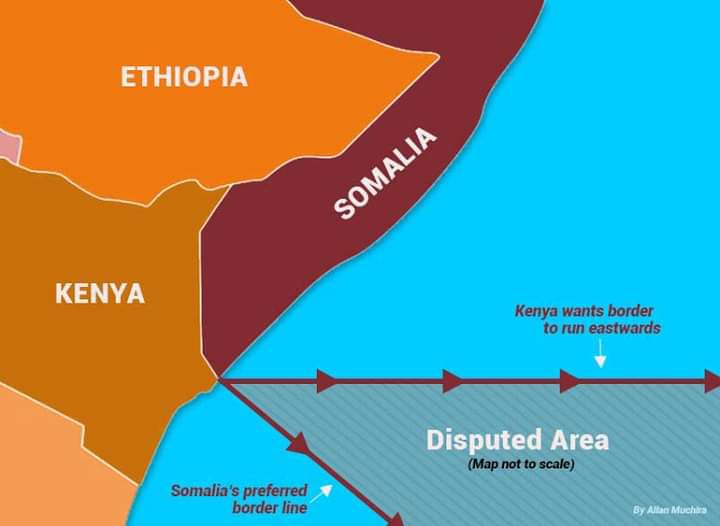 Rejects the claim made by the Federal Republic of Somalia in its final submission number 4.

Done in English and in French, the English text being authoritative, at the Peace Palace,