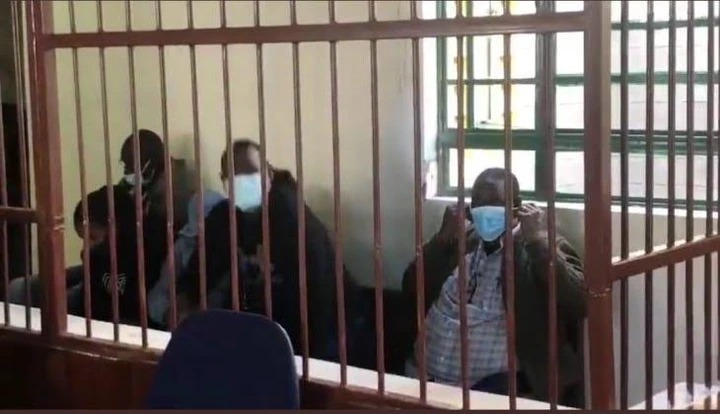 One of the defendants informed Chief Magistrate Diana Mochache in court that they couldn't witness two of their jail informants and facilitators being charged alongside them.

He clarified that the two are not the same men who were apprehended by DCI and are now being held in jail awaiting trial. Three wardens and Kamiti chairman Mr. Mutembei were among those arrested.

"Two wardens who assisted us in planning our escape from the Kamiti have not been charged," Musharaf Abdalla Akhulunga stated.

The offender promised to reveal the names of the two policemen, whom he claims he knows well, in exchange for not being sent back to Kamiti, where he will be executed.

"If they are brought forward, I am prepared to identify them." If we were hauled back to Kamiti, our lives would be in jeopardy," he warned.

The fugitives also claimed that the DCI overlooked various pieces of evidence that were not retrieved from the crime scene. One of them specified a bar of soap, a pair of scissors, and white photocopying papers to cover the hole they bored in the wall (the soap served as glue).

"I can't seem to find the pair of scissors we used to cut the blanket into pieces for use as a rope." One more blade and a hook are also missing.

Photocopying paper rims are also absent on two occasions. To conceal the hole in the wall, we used white photocopier paper. "It would be impossible to perceive the difference because they are the same color as the cell walls," Musharaf Abdalla, the most outspoken of the three, stated.