By Githuria.co.ke (self media writer) | 3 months ago 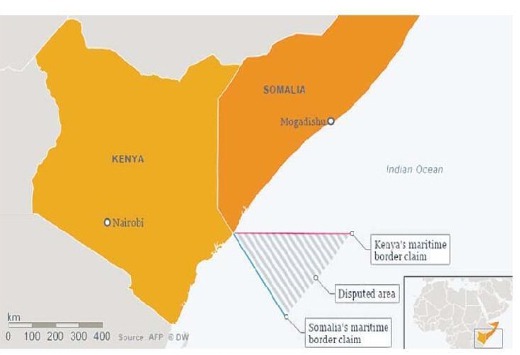 Kenya has said it will not recognise a verdict by the International Court of Justice (ICJ) on a maritime dispute filed by Somalia.

At the same time, Kenya has withdrawn its recognition of The Hague-based court's powers to settle boundary disputes, after withdrawing from a United Nations treaty recognising ICJ's compulsory jurisdiction on boundary disputes on September 24.

However, despite Kenya boycotting the oral hearings, the ICJ will on Tuesday next week determine whether the contested area belongs to Somalia or Kenya.

Foreign Affairs Principal Secretary Kamau Macharia dissented the pending judgement, socal impact in there ,economic Macharia said that, according to the government, the case before the ICJ was filed to achieve ulterior motives, adding that the court process was flawed.

He however said the country is ready to defend its territory AS a sovereign nation, Kenya shall no long er be subjected to an international court or tribunal without its express consent.

"The filing of the case against Kenya at the court, and the courts assumption ot jurisdiction where it had none, are demonstrative of new tactics of using pseudo-judicial processes to undermine territorial integrity" said Macharia.

Although Kenya decided to walk out of the oral hearings, it has filed documents before the court to illustrate how Mogadishu's insecurity has contributed to several attacks in Nairobi.

Kenya fronted a seven-point argument demonstrating why Somalia does not deserve the orders it is seeking. It cited security, the boundary that the two countries have enjoyed since colonial times and its agreement to settle case out of the court.

According to Kenya, Somalia has not know peace for decades, ever since the start of the civil war in 1991 and the rise of AlShabaab militia group, which has caused Kenya immense loss in terms of lives and businesses.

In 2019, Somalia floated 15 mineral block within Kenya's territorial waters for auction including four contested oil blocks, with January 1, 2020 marked as the date the successful bidder would start exploration.

A document titled Offshore Somalia 2019 an leaked from Somalia's Ministry of Petroleur and Mineral Resources showed five oil block in Lamu are a part of those Somalia has floated to investors.

Kenya is aggrieved that Somalia is emboldened by the fact that it has friends of Kenya on Mogadishu's list of those who have purchased oil wells in the contested area for exploration.

Also at the heart of Kenya's protes is the presence of Justice Abdulqawi Ahme Yusuf, a Somali national, in the case The second issue in Kenya's court documents is the existing boundary between the two countries.

The contested area is divide into two; the Northern and Southern command area, which the Kenya Navy controls. In 2014, Somalia filed a ase before the IC which coincided with Tanzania's filing be fore the United Nations of its willingness to negotiate with Somalia about their maritim boundary.

Opinion: Is Charity Ngilu a political prophetess or a wise politician?