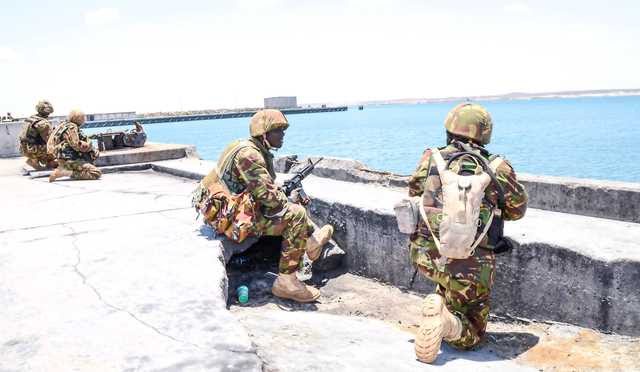 After seven years of bitter wrangling between Kenya and Somalia over control of disputed Indian Ocean waters, the International Court of Justice (ICJ) issued an eagerly anticipated judgment demarcating the two countries' maritime boundary on October 12, ruling mostly in Somalia' s favor. The main point of contention between the parties had been how the maritime border should be drawn. 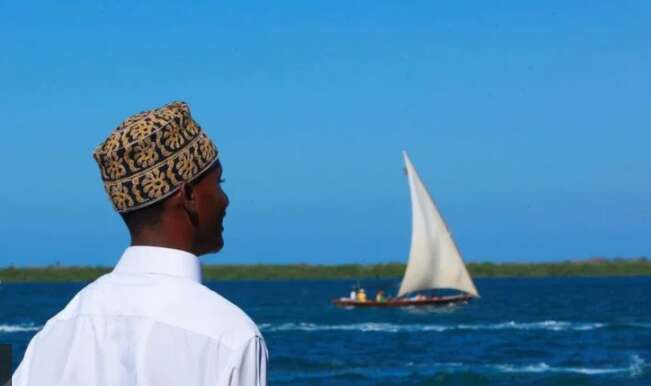 Kenya contended that it should follow a straight latitudinal line from the point on the coast where the countries' land borders meet. Somalia argued that the sea border should run south- east, perpendicular to the coast, where its land border with Kenya meets the sea.

The resulting disputed triangle covered 100, 000 square kilometers of maritime space. Much of that territorial sea is thought to be rich in fisheries and oil and gas deposits. 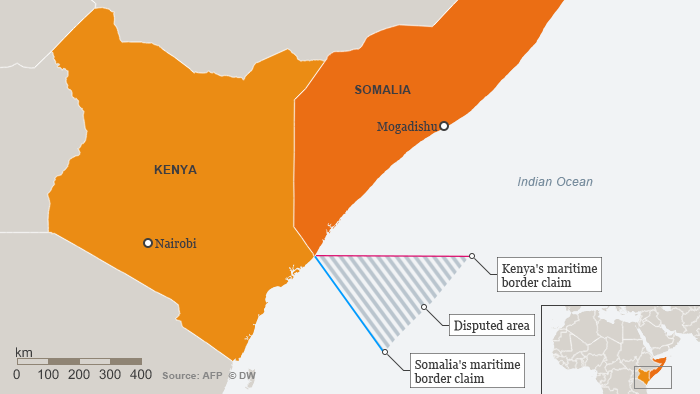 In the end, the judges walked a fine line, awarding each party roughly half of the disputed territory. The bench unanimously rejected Kenya' s claims that the two countries had shared a decades- long understanding of where the maritime border is. In establishing the new boundary, the court largely agreed with Somalia' s reasoning for how the boundary should be delineated in a split decision.

The Court also stated that it attempted to " attenuate in a reasonable and mutually balanced manner" any impact on Kenya' s access to the sea by granting Nairobi a significant portion of the disputed territory. In practice, the court meant that the boundary line would extend south- east, but at a lower angle to the coast than Mogadishu had originally requested. 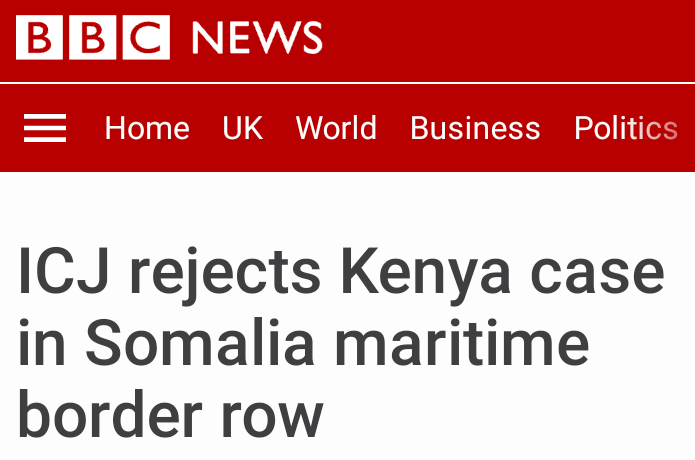 Meanwhile, the Court denied Mogadishu' s request for compensation for Nairobi' s historical exploitation of the disputed waters, concluding that Kenya had not violated its international obligations through its maritime activities in the disputed area. Kenyan President Uhuru Kenyatta immediately condemned the decision, while Somalia' s President Mohamed Abdullahi Mohamed " Farmajo" hailed it as a historic victory.

Why Did Out- of- court Negotiations Fail?

Kenya and Somalia had agreed as early as April 2009 to settle the dispute through negotiations based on a Memorandum of Understanding they jointly filed with the UN Secretariat, rather than establishing borders. According to a senior official in Somalia' s foreign ministry at the time, Kenya never took Somalia' s approaches for bilateral talks seriously at the time, and at least three attempts to meet Kenyan officials over the issue failed. 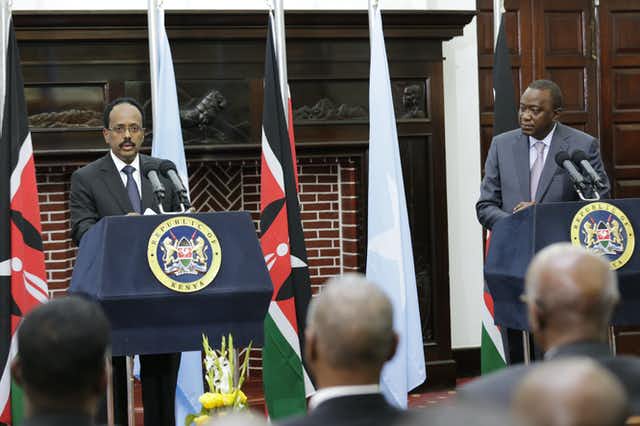 According to a Kenyan official, Kenyan foreign ministry officials were " negligent, " underestimating the gravity of Mogadishu' s demands. With political talks stalled, Mogadishu pursued its case at the International Court of Justice, dragging Nairobi reluctantly into proceedings in 2014. Kenya made repeated representations to the African Union Peace and Security Council beginning in September 2019, urging Somalia to withdraw the case and resolve the matter through talks.

Kenya' s request to remand the case to the African Union was denied by judges in The Hague. Nairobi claims that the court decision, which it claims significantly alters the existing approach that many countries take to delineating borders along lines parallel to the equator, could lead to a cascade of similar border disputes along the Indian Ocean coast.

How Has the Case Affected Relations Between Somalia and Kenya

The case has strained relations between Somalia and Kenya, particularly in the last two years. Ties deteriorated in February 2019 when Somalia held a conference in London to gauge interest in offshore oil and gas exploration. Kenya protested vehemently, accusing Somalia of auctioning off disputed land blocks. Somali officials denied that the blocks in question were in the disputed zone. 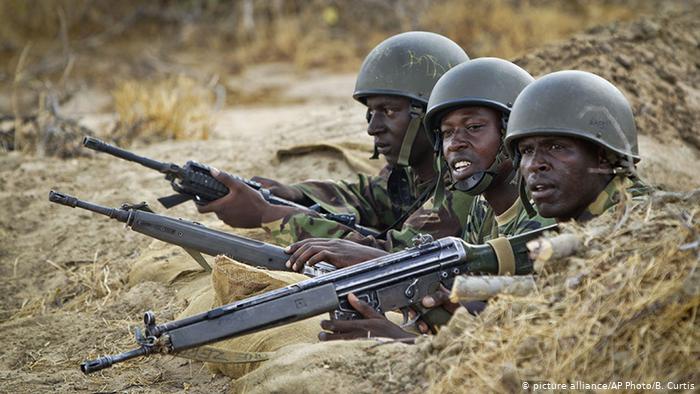 Meanwhile, Mogadishu claimed that Nairobi has been illegally annexing Somali waters since the state' s collapse in 1991, taking advantage of Somalia' s dysfunction. During the legal battle, both parties engaged in an escalating cycle of tit- for- tat tactics. These include a brief Kenyan ban on all flights to and from Somalia, as well as a Somali ban on the importation of Kenyan khat, a vital source of income for thousands of farmers in central Kenya.

Nairobi has raised the prospect of recognizing Somaliland, whose declaration of independence in 1991 Mogadishu rejects and no other country recognizes. Kenya has also threatened to close the Dadaab and Kakuma refugee camps, which house hundreds of thousands of Somali refugees, on numerous occasions.

Kenya and Somalia had suspended diplomatic relations by the end of December 2020, following accusations from Somali federal officials against Kenya, which had deployed thousands of troops in Somalia as part of the African Union Mission in Somalia (AMISOM) to combat Al- Shabaab.

These officials claimed that Nairobi was interfering in Somali politics by siding with Ahmed Madobe, the president of Somalia' s Jubaland state, in his separate dispute with Mogadishu. Kenya withdrew its legal team from the court' s proceedings in The Hague in March 2021. Kenya claimed that the International Court of Justice (ICJ), which had been presided over by Judge Abdulqawi Ahmed Yusuf, a Somali national, was biased. 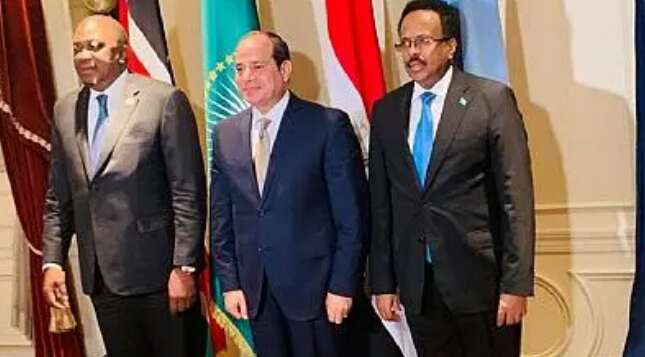 Despite the fact that diplomatic relations between the countries were restored in May thanks to Qatari mediation, Kenya began hardening its stance again as the ruling approached. President Kenyatta presided over a ceremony on September 23rd to upgrade a military station near the disputed waters into a full naval base, in what was seen as an effort to increase pressure on Mogadishu.

Kenya condemned the ICJ and a " flawed" court process in a statement issued on October 8, just prior to the ruling. Invoking the defeat of ethnic Somali rebels fighting to secede from Kenya and join Somalia in the 1960s, a senior Kenyan official also stated that the country would be as steadfast in defending its territorial integrity as it was during that revolt. 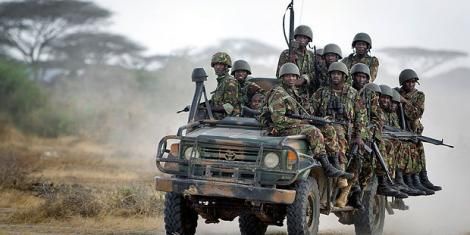 After the decision was announced, positions became even more entrenched. Kenyatta stated that the decision of the court would " strain relations between the two countries. " Meanwhile, leading candidates in Kenya' s upcoming 2022 elections have urged authorities not to cede " an inch of the country. " While some Kenyan officials told Crisis Group that the judges' efforts to find a middle ground surprised them because they expected the judgment to lean more toward Somalia' s position, they said they would still reject the ruling. 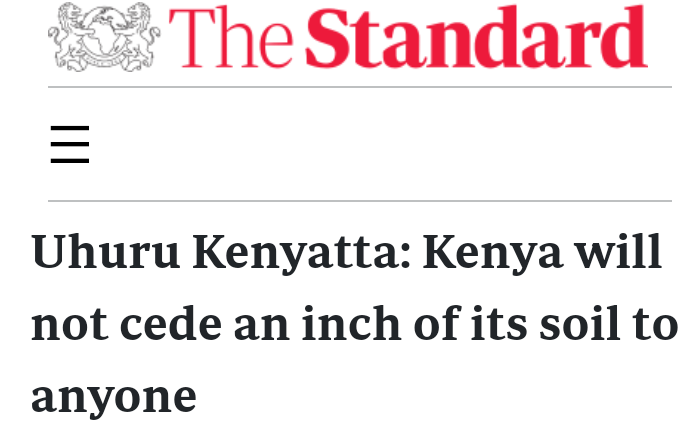 Somalia' s political class sees the decision as a victory for the country, and many are positioning themselves to benefit politically. In recent weeks, all of the main contenders have positioned themselves as champions of Somali sovereignty, opposing what they see as the country' s oppressive southern neighbor. President Farmajo, in particular, has had strained relations with Nairobi since taking office and will almost certainly look to the ruling for political support as he prepares for Somalia' s postponed elections.

His opponents, including former Presidents Hassan Sheikh Mohamud and Sheikh Sharif Ahmed, argue that Farmajo merely benefited from a court case they initiated during their respective terms in office and that they should be given more credit.

Relations between Nairobi and Mogadishu will almost certainly continue to impede efforts to combat Al- lethal Shabaab' s insurgency. Instead of focusing on how to retake large swaths of south- central Somalia, including Jubaland, Mogadishu has sent troops to fight forces allied with Jubaland President Ahmed Madobe. 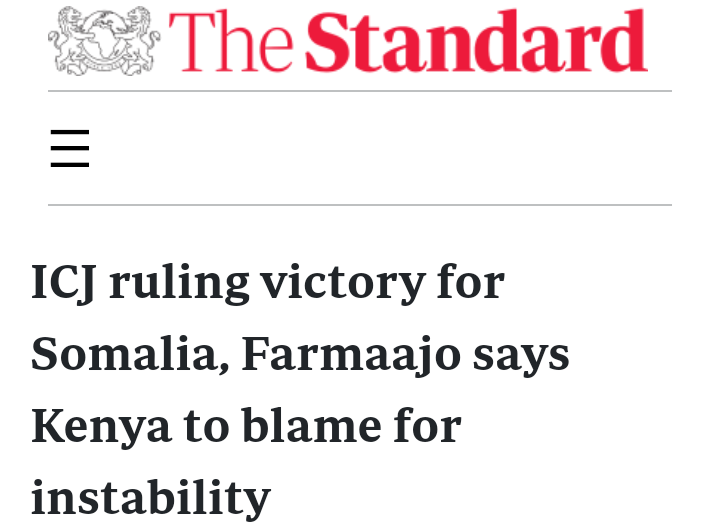 Madobe relies on the Kenyan military to help him secure Kismayo, Jubaland' s capital and main port. Although, as Crisis Group has reported, the internal drivers of the conflict between Mogadishu and Madobe are internal, the former seeks to centralize power and resources, while the latter prefers greater devolution, tensions between Kenya and Somalia over the maritime dispute may prompt Kenya to increase military support for Madobe.

How Can Nairobi and Mogadishu Rebuild Ties Going Forward?

Both parties have a strong desire to mend fences. Somalia and Kenya have historical, cultural, and economic ties. Many citizens of both countries share a common ethnic heritage, and the neighbors' social and commercial ties have proven deep and long- lasting. Thousands of Kenyans work and live in Somalia, primarily teachers and traders. Tens of thousands of Somalis live in Kenya as well, including many university students who attend Kenyan institutions. 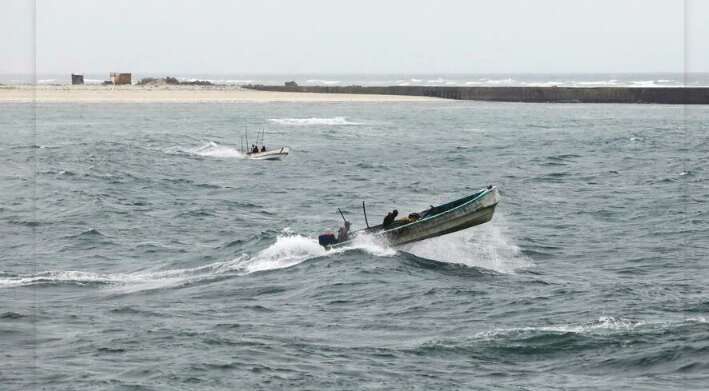 The repeated clashes between the sides disrupt the lives of tens of thousands of ordinary Somalis and impede the larger effort to stabilize Somalia, which will necessitate continued involvement by Kenya (a key AMISOM troop contributor) and other neighbors. Despite strong feelings on both sides, particularly in Kenya, everyone is interested in de- escalation and increased cooperation.

Thus, while Nairobi and Mogadishu are likely to exchange more venomous words in the short term, a direct armed confrontation over the maritime dispute is unlikely, despite the sometimes belligerent rhetoric. Some Somali officials have privately told Crisis Group that Mogadishu may ask a third country to patrol the oceans to counter Kenya' s claims, but that prospect appears remote, as Somalia' s allies are more likely to push for a more amicable settlement. 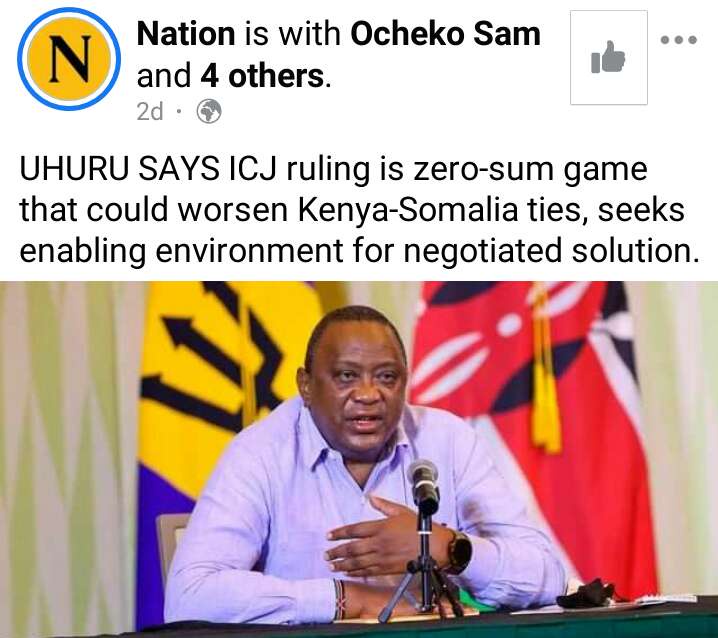 Along those lines, talks to agree on a mutually acceptable approach to enforcing the judgment would be the most promising way to manage the risk of confrontation. Qatar, which has good relations with both Kenya and Somalia and, as previously stated, assisted in mending fences between the two earlier in 2021, has quietly offered to mediate. Nairobi and Mogadishu should accept this offer and use any discussions to set up mechanisms for future dialogue. 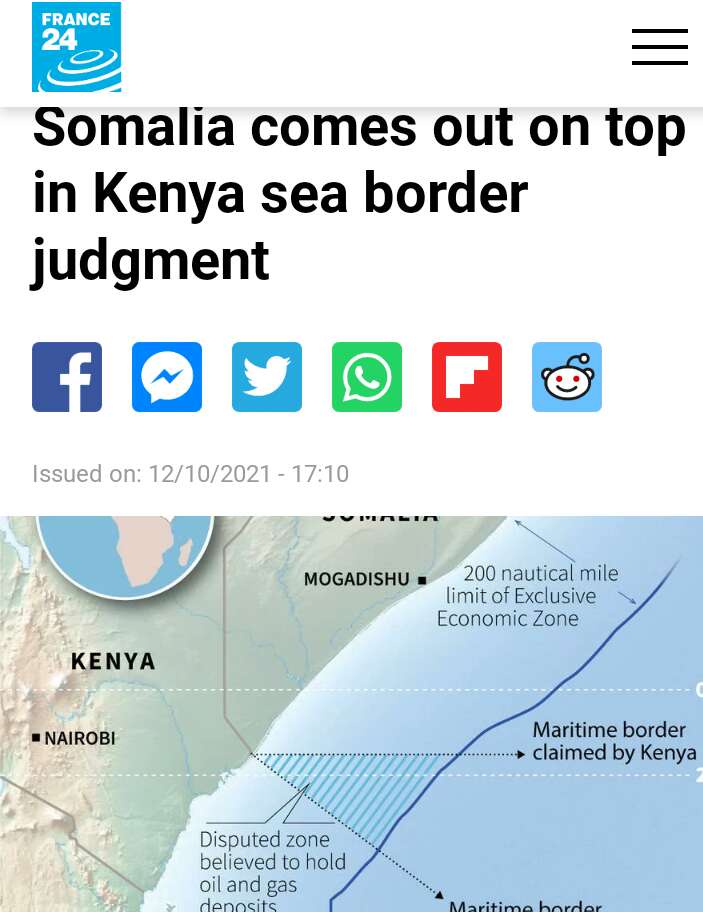 Although both sides have repeatedly promised to reactivate the Somalia- Kenya Joint Commission for Cooperation, a forum that brings together high- level officials from both countries to discuss bilateral ties, little progress has been made. The two neighbors should reactivate this platform to discuss their many shared interests and resolve disputes.

Jubilee's Latest Message About NDC, Leaves a Powerful Message Ahead of Tomorrow's Meeting