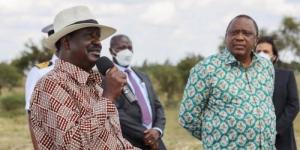 Kenyans are in great shock after Raila Odinga and the Building Bridges Initiative (BBI) secretariat have urged the Supreme Court to reject an application by five international law experts to join the BBI appeal.

They have argued that the five professors application was late and not only meant to derail the BBI case by prolonging the hearing but also had undisclosed ulterior motives.

Besides the BBI lawyer Paul Mwangi asked the Supreme Court under Chief Justice Martha Koome not to admit the five who wanted to enjoin the case as amici curiae friends of the law.

He added that amicus brief ought to be made timely and presented within a reasonable time.Dilatory filing of such briefs tends to compromise their essence as well as the terms of the Constitution call for resolution of disputes without undue delay.

The BBI team also added that the five professors would repeat the same argument presented in court by anti-BBI teams as they had not demonstrated how their submissions would assist the Supreme Court.

US based Prof Richard Albert while applying to join the BBI case also argued that the BBI bill should have been argued as a constitutional dismemberment rather than a constitutional amendment in the junior courts that declared the initiative null and void.

In conclusion the court also directed that it would make a ruling on a scheduled date but urged parties that had not responded to the application for joinder to do so by Friday October 22.

What Next For TSC on Deadline For Teachers After Portal Begins Messing Up With 3 Days Remaining?

Othaya :Dormitories in Karima Boys Highschool Set On Fire Hours After Students Got Back From Midterm

Video; Another Boys School In Central Kenya On Fire Days After Students Resumed From Midterm