By Sherrylove (self media writer) | 3 months ago

Life seems so unfair when one has to raise her child alone when the stingy baby daddy is out there living freely and caring less about the kids. However, justice can be served if you choose the right lawyer and lawyer Danstan Omari is the best choice you would have to consider. 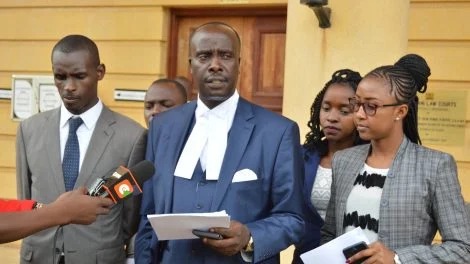 Here are some cases that this prominent laywer has handled in regards to paternity matters;

This is one of the latest paternity case that Omari is handling.

Honorary Bishop David Muriithi has been sued for the alleged negligence of his two-year-old son. The baby mama has hired none other than Danstan Omari to represent her and the baby in court. She is seeking a Sh100,000 monthly maintenance fee in court. Omari claims that David has neglected his responsibilities as a father hence, “denying the child what is rightfully his.

The Senate speaker, Kenneth Lusaka was dragged to court in June 2021 by a woman who claimed to have been neglected by him after an unexpected pregnancy.

The woman, as expected, hired paternity case expert, Dansan Omari to help her fight her battles in court. During the hearing, Omari urged the Speaker of the Senate to claim responsibility for his unborn child who was conceived as a result of “a jolly intimate affair” which had been going on for three years until March 2021.

He also asked the court to order Lusaka to pay Sh 25 million in child support. A cornered Lusaka would admit to fathering the child and request the matter be settled out of court.

3. Charles Nyachae vs the baby Mama

In 2019, Charles Nyachae, who's also a lawyer, was accused of impregnating and neglecting one Esther Wamuyu after a one-night stand. However, Charles sought refuge in Omari. Omari would expose Wamuyu for exaggerating her child’s school fees, she claimed it was Sh 40,000 while it was only Sh 26,000. The lawyer also prohibited the baby mama from texting or calling his client.

The alleged baby Mama, Mary Kwamboka once went to the Milimani Law courts in Nairobi and screamed to anyone who cared to listen, claiming former Chief Justice David Maraga was a deadbeat dad to her 6-year-old daughter. during her appearance at the Milimani Law Courts in 2020.

But the case was promptly dismissed, after Maraga’s lawyer, aka the master of paternity cases, Danstan Omari, revealed she had failed to pay the Sh 655 required to file a court case. “All documents presented including the birth certificate and letters from the school were forged,” he added.

Content created and supplied by: Sherrylove (via Opera News )