By amadijustus (self media writer) | 7 months ago

The Chinese are widely known for their Kungfu fighting skills, with most Africans thinking that every Chinese they see around has perfectly mastered the Kungfu art.

However, this was not the case as was witnessed in a fierce fight that erupted between a Chinese staff and his black colleague at work. The country where the incident happened is however unclear. The hilarious video was shared by Mpashogram on their Instagram page. 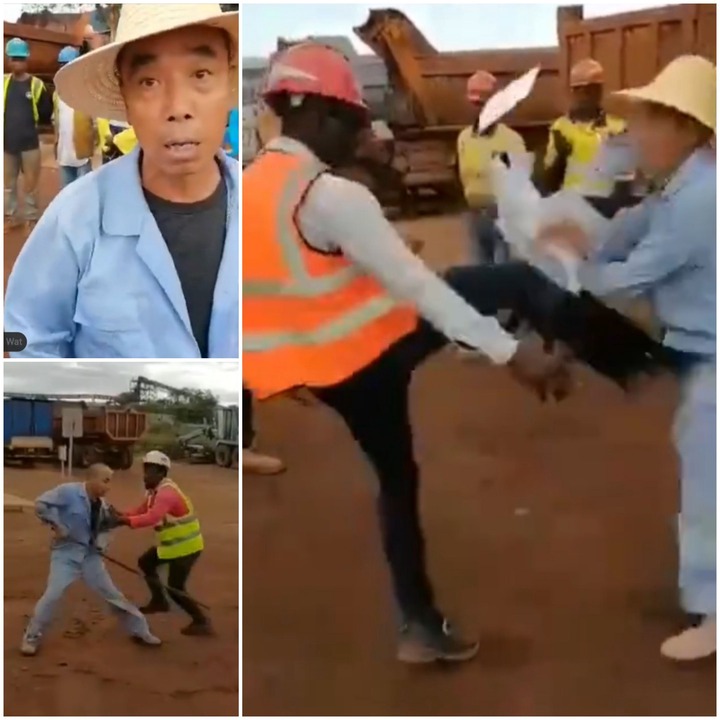 It is alleged that the workers went for a safety meeting when the disagreement occurred between the two. The Chinese man was spotted wildly complaining about something while speaking their Chinese language. 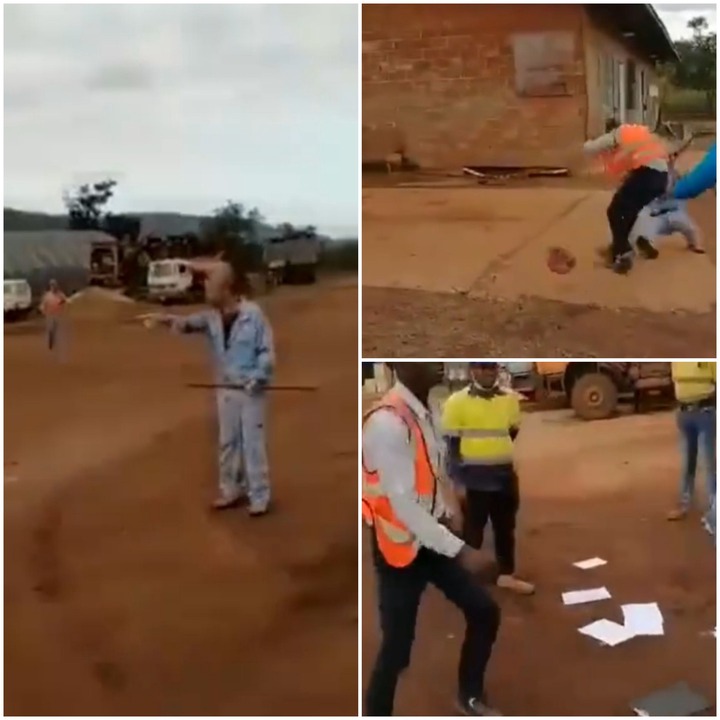 Anger engulfed the black man who then decided to teach the Chinese a lesson of his life. He wanted to show him that he messed with the wrong guy.

The man gave the Chinese a perfectly timed flying kick. When the Chinese tried to fight back, he was added a few blows on his slim face. For the first time, I saw his small eyes open up wide! 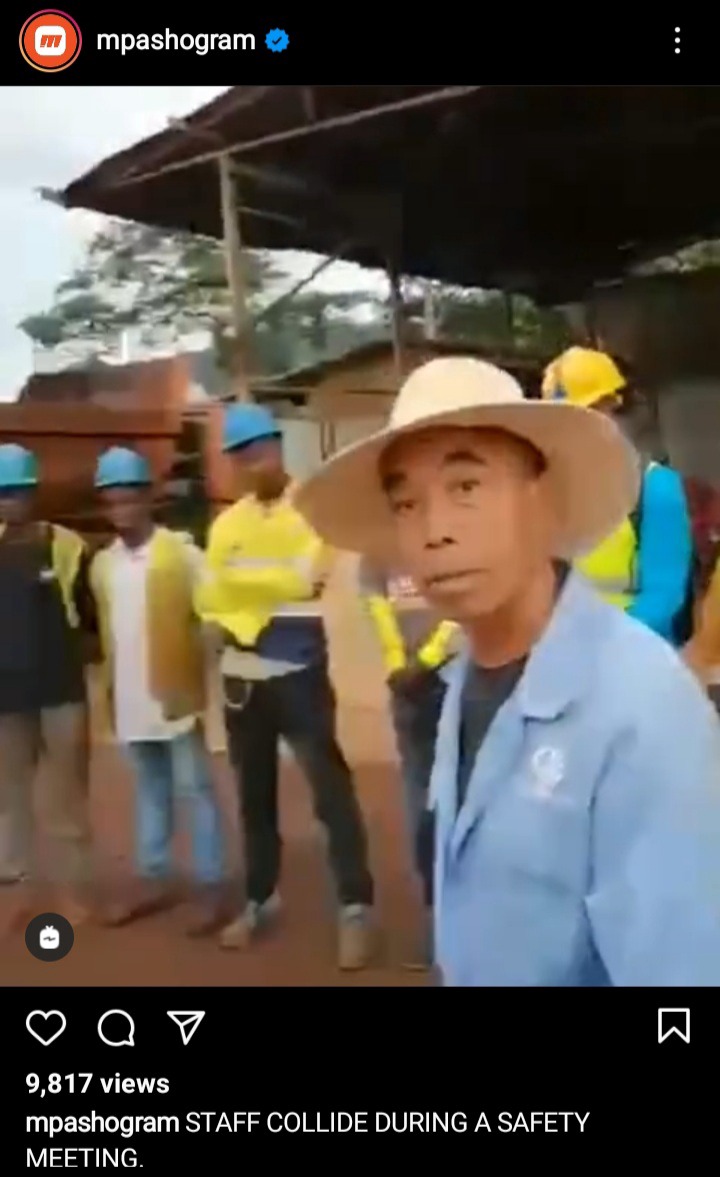 The man had already overpowered the Chinese. The Chinese ran for a piece of metal rod to defend himself. He knew he was perishing. His fellow Chinese tried to talk to him in a language he can understand best but to no avail. He kept on, confident that he would avenge.

To his surprise, the black man gave him a mega kick that sent him to the ground, unable to stand up for some few seconds. He was helpless. He was beaten at his own game. This time round he messed up with the wrong guy who didn't fear losing his job. 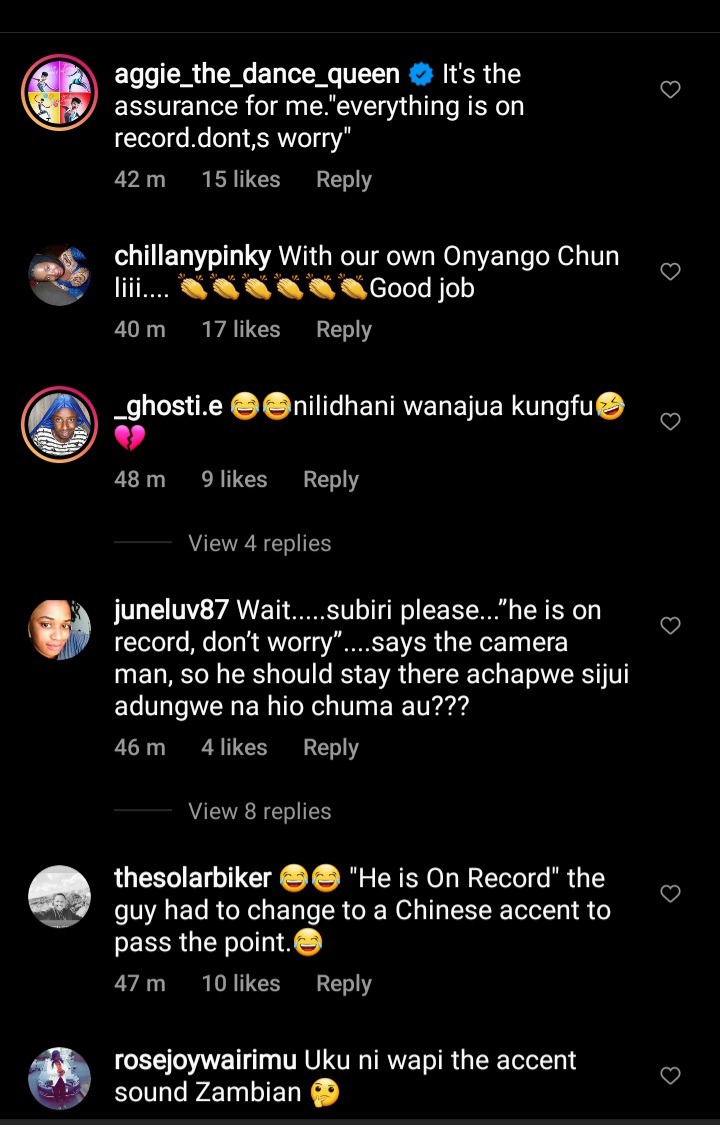 The camera man kept on shouting at the black guy to stop worrying since everything was on record. However, the man kept fighting back in self defence. He was justified. He was fighting for his rights which had been violated. He then picked up his papers one by one as his colleagues helped him. 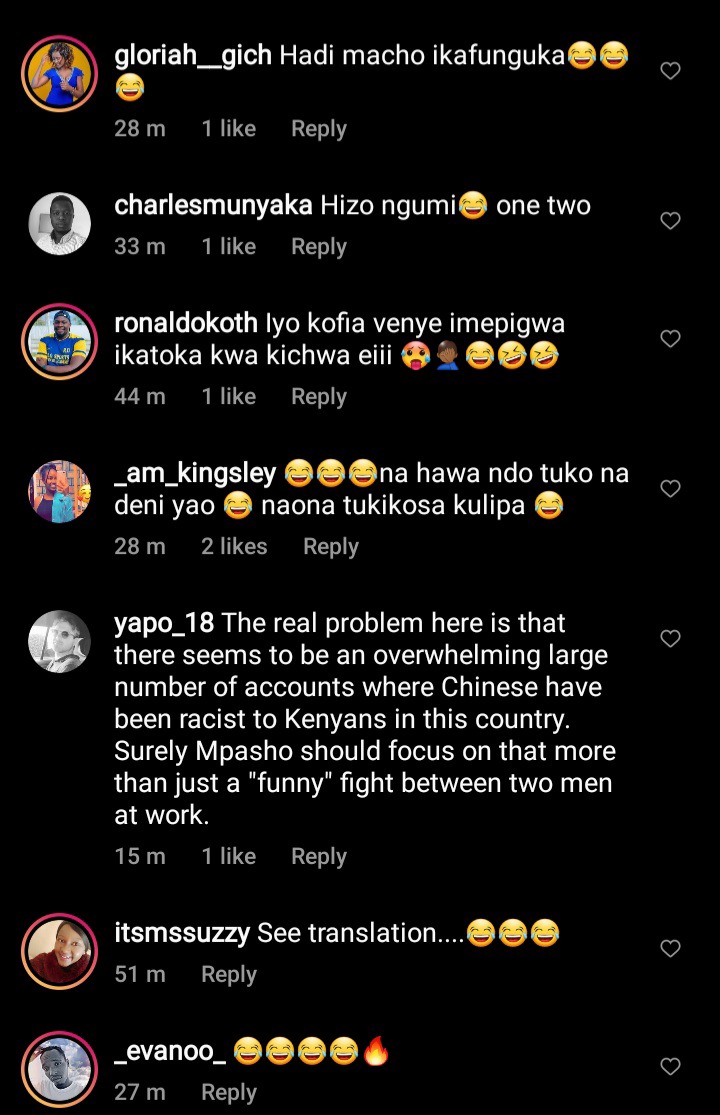 The post sparked mixed reactions online from netizens. While some people were on the side of the black man, others laughed hysterically at the Chinese guy for lack of basic Kungfu skills. 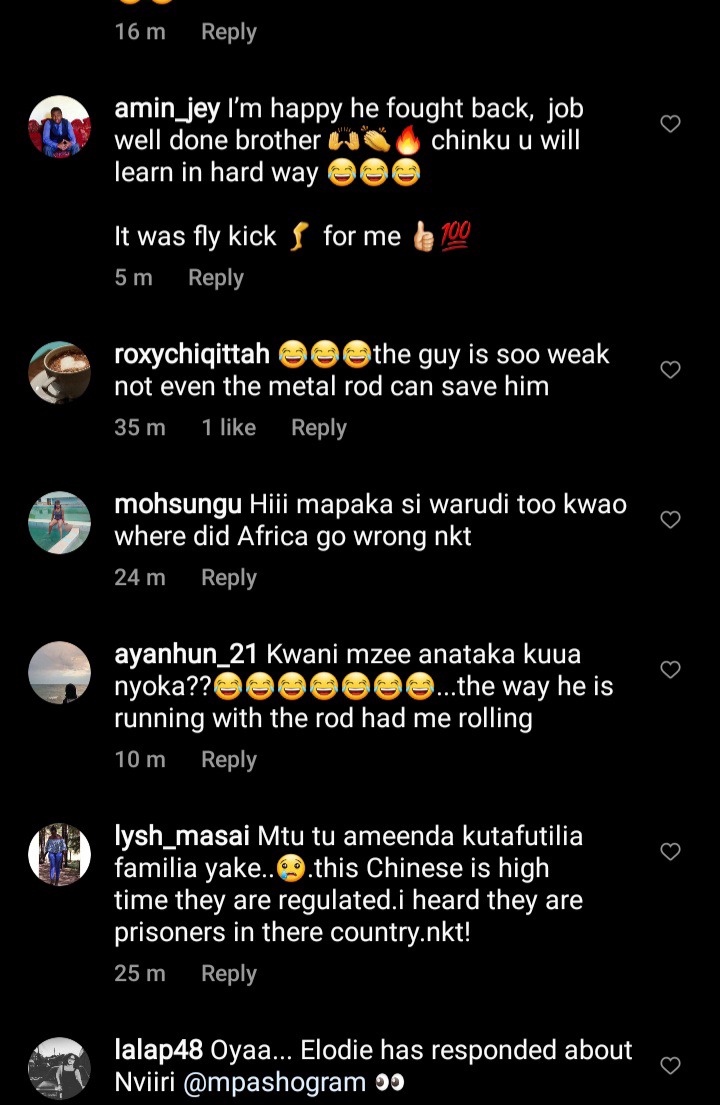 Some people also commented that the Chinese is weak to the extent that he cannot win a fight even with a weapon. Some fans also heaped praises on the black man for bravely fighting back. 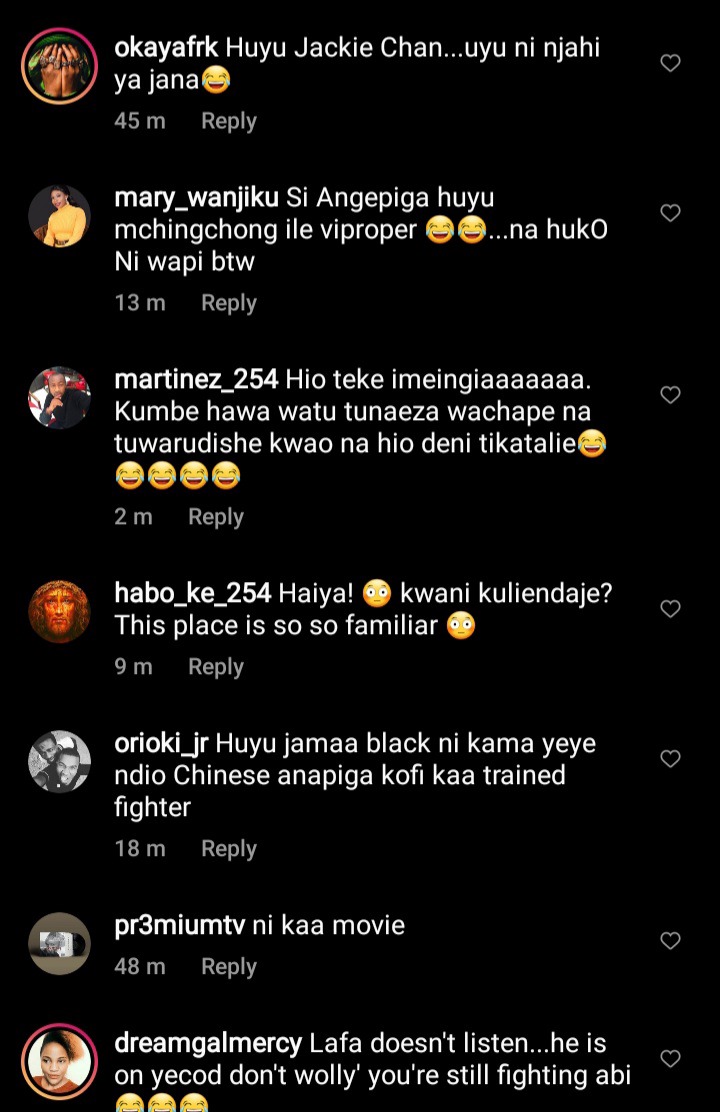 Another fan commented that the camera man's accent sounds like a Zambian's accent while a fan by the name Frank Ayodi termed this as modern day colonialism. 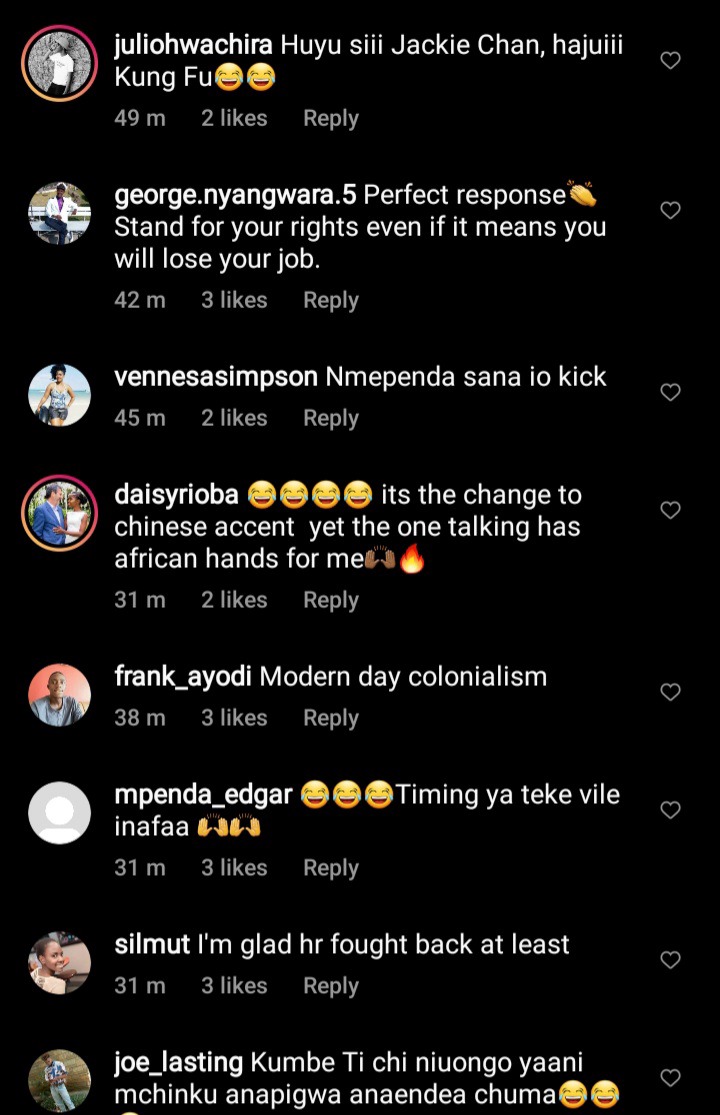